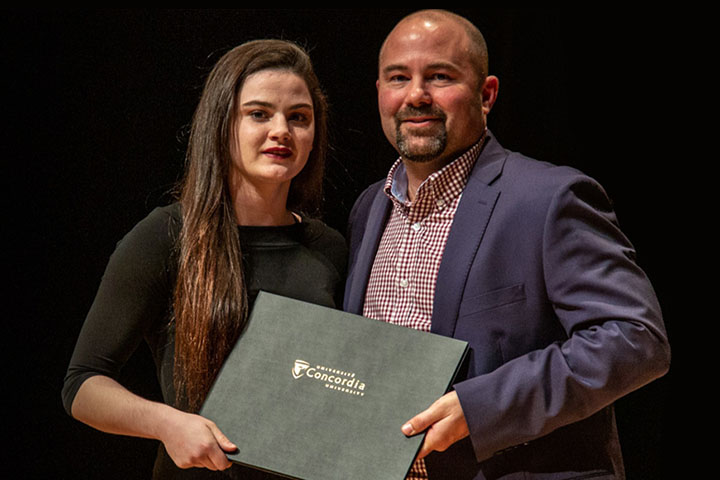 Wrestler Jade Dufour was named Female Athlete of the Year, while basketball player Ricardo Monge was the recipient of Male Athlete the Year honors at the annual Concordia Stingers awards gala attended by more than 400 people on March 29 at the Oscar Peterson Concert Hall in Montreal.

A fourth-year athlete, Dufour won a gold medal in the 50-kilo weight class at the 2018 World University Wrestling Championship in Brazil last September.

She represented Concordia at five Canadian university tournaments this season. She was on the podium at each competition, winning gold medals at the Concordia Invitational, the York Open and the Western Open.

The Exercise Science student from Lakeshore, Ont., competed at her fourth straight U SPORTS national championship last month. She won her first gold medal and was named a first team all-Canadian. Her performance helped the Stingers women’s wrestling team finish in third place at the national championship.

A team captain, Monge was instrumental in leading the Stingers to the RSEQ men’s basketball regular season and playoff championships.

A Master’s of Science in Finance student from Gatineau, Que., he finished the season as the fourth-leading scorer in the RSEQ with an average of 15.5 points a game. He led the league in steals and assists.