Sam Garland is one of seven men's wrestlers heading to nationals. 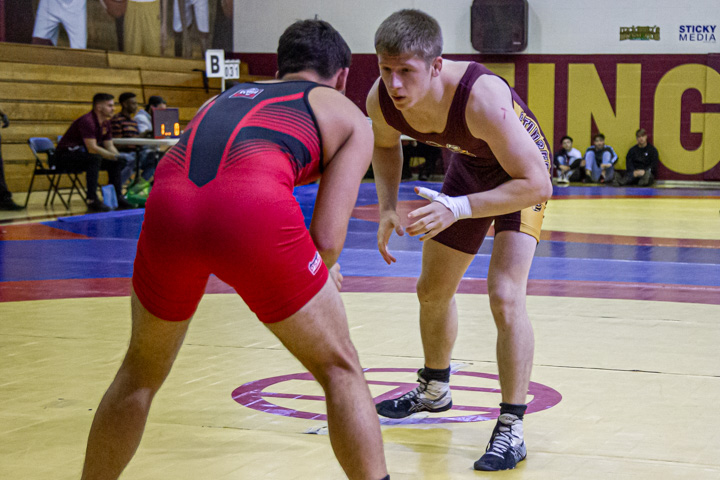 Amanda Savard, the defending gold medallist at 67 kilos, will lead a team of 12 Concordia Stinger student-athletes at the U Sports national wrestling championships this Friday and Saturday at Brock University in St. Catharines, Ont.

The third-year competitor from Montreal is the only returning champion the Stingers have on their roster for nationals. She won her first gold medal last February defeating the University of Alberta’s Haley Heffel in the final. Savard was also a bronze medallist in 2018, her first season with Concordia.

At 55 kilos, rookie Jayd Davis is someone to keep an eye on. The Pickering, Ont. native finished first at the 2019 Canadian Senior Wrestling Championships last March. She has represented Canada at several international events, including the world junior championships in 2017.

Rounding out the women’s team are: Laurence Beauregard (59 kg), who earned a bronze medal in 2018; Kaya Dubé Snow (51 kg), who finished seventh in both 2018 and 2019; and Kayleigh Prieur (48 kg) who finished fifth at her first university championship last year.

The Concordia women’s team finished third at nationals in 2019 behind the first-place Brock Badgers and the second-place Alberta Pandas.

On the men’s side, three of Concordia’s seven qualifiers have won medals at previous nationals. Third-year athlete Samuel Barmish (82 kg) was a bronze medallist in 2018 and won a silver medal in 2019. Guseyn Ruslanzada (76 kg) was on the podium in 2018 with a bronze medal, and Aaron Orszak (72 kg) won his first medal at nationals last year when he earned a bronze.

Someone to watch carefully this year is Jeremy Poirier (100 kg). He finished fifth in 2017. However, competing at 92 kilos last March, he finished first at the Canadian senior championships.

At the 2019 tournament Concordia’s men’s team finished in second place with 58 points. Brock won the championship with 83 points.

The wrestling team was coached by Victor Zilberman from 1977 through the summer of 2019. He guided his athletes to 72 gold medals and eight team titles at the nationals. Since 1980, Concordia has won 153 medals. In addition, 11 Concordia athletes have been named the outstanding wrestler at the tournament, and Zilberman has been named Coach of the Year on five occasions - in 2012, 2011, 2006, 1986 and in 1984.

David Zilberman took over the head coaching duties in the fall of 2019. At the 2020 nationals he will be assisted by Olympian Martine Dugrenier and Victor Zilberman.

The championships get underway with preliminary matches Friday at 10 a.m. The following day, the bronze medal matches start at noon with the gold medal round set for at 2 p.m.