Jayd Davis won a gold medal and was named rookie of the year. 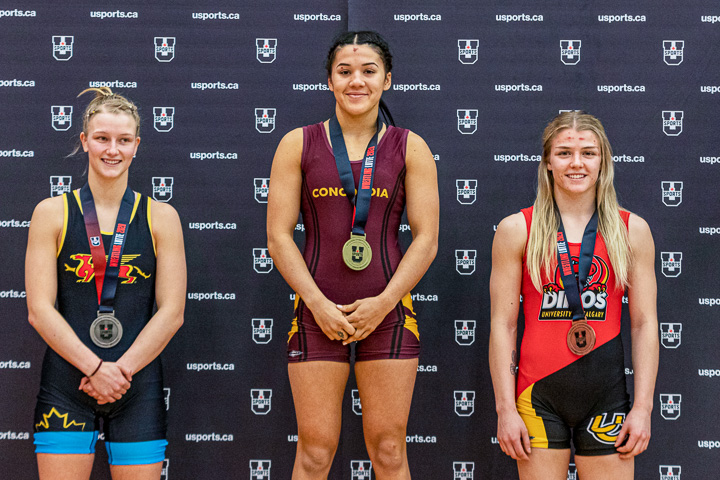 Concordia Stinger Guseyn Ruslanzada won a gold medal and was named the outstanding male wrestler at the U Sports national championship hosted by Brock University on Friday and Saturday.

The second-year athlete from Pierrefonds, Que. dominated the competition in the 76-kilo weight class. In the preliminaries on Friday, he beat Ty Bridgwater (Dec 4-4) from Brock University, Amarvir Atwal (TF 10-0) from Fraser Valley University and John Fayad (fall) from University of Calgary.

In the gold medal match on Saturday, he defeated Ben Zahra of McMaster University (Dec. 5-4). Ruslanzada won a bronze medal as a rookie competitor at the nationals in 2018.

This is the third consecutive year that a Concordia men’s wrestler has been named the outstanding competitor at the national championship. Alex Moore and Francis Carter won the award in 2019 and 2018, respectively.

Ruslanzada’s efforts helped the Concordia men’s team finish in third place at the championships. The Stingers had 45 points. Brock won the title with 76 points. The University of Saskatchewan finished second with 54 points.

In addition to Ruslanzada, Aly Barghout (120 kg) was also a gold medallists. Third-year Stingers Samuel Barmish (82 kg) and Aaron Orzsak (72 kg) won bronze medals. Rounding out Concordia’s contingent are Jeremy Poirier who finished fourth at 100 kg, Julien Choquette who was fifth at 90 kg and Samuel Garland with a fifth-place finish at 68 kg.

On the women’s side Concordia finished in sixth place with 31 points. Brock was first with 55 points and Saskatchewan took second place with 42 points.