From left, Hotton, Royer and Gallagher in action last season. 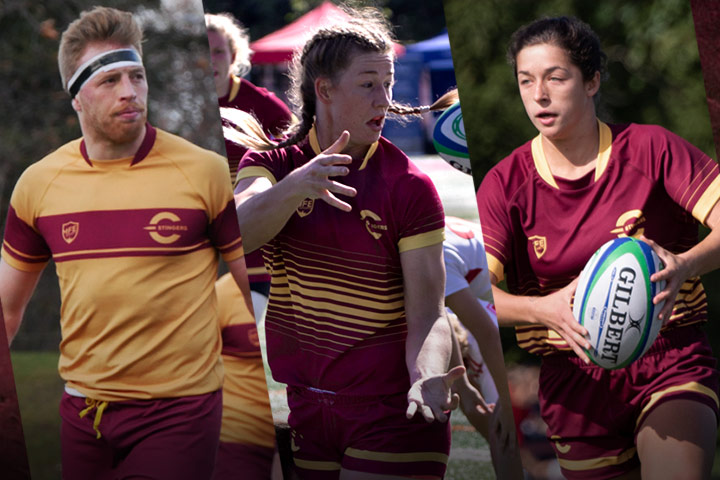 Four members of the Concordia Stingers rugby programs will experience their sport with various clubs across France, beginning this month.

Laetitia Royer, who was an RSEQ all-star for the Stingers in 2019, is with Lons Rugby Féminin Béarn Pyrénées. It is an Elite 1 club competing at the highest level of women’s rugby in France. Lons is located in the Southwest of the country and has a population of approximately 14,000.

Academic all-Canadian Emma Gallagher has opted to play for Stade Rochelais in La Rochelle, a port city on the Atlantic Ocean. Its population is about 75,000. The club competes at the Elite 2 level, the second highest for women’s rugby in France.

Gallagher will travel after her season with Stade Rochelais and then return to Concordia in 2021 for a final season with the Stingers.

Alex Tessier, an accomplished three-time U Sport all-Canadian who wrapped up her university career in 2017, is currently with Stade Bordelais in Bordeaux, France. This is also a port city in the Southwest of the country and has a population of 250,000. Stade Bordelais is an Elite 1 club.

Games in the Elite 1 division started the weekend of Sept. 5, while the Elite 2 competition gets under way this weekend. Playoffs take place in the spring.

On the men’s side, Lucas Hotton, a former Stinger all-star and the captain of the Quebec provincial team, has signed with Club de CMF Floirac Rugby. Floriac is in the Bordeaux region of France. It’s a Féderalé 1 team competing at the semi-professional level. There is a blend of amateur and paid players.