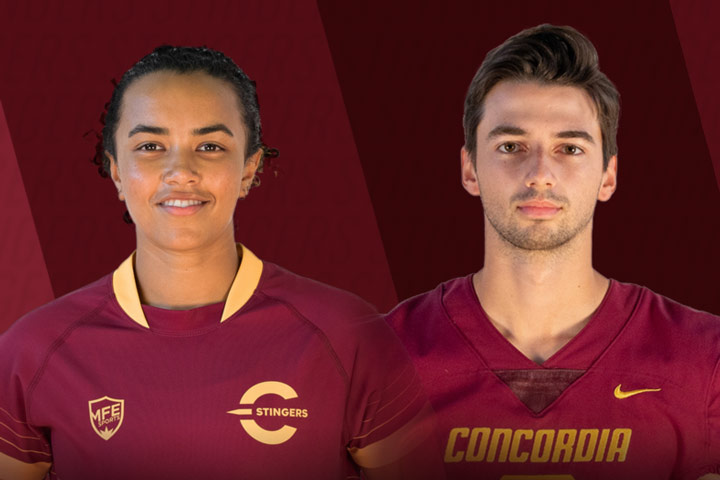 Baxter, Roy - Athletes of the Week

Jasmine Baxter of the women’s rugby team and Olivier Roy of the football team have been named the Subway-Concordia Stingers athletes of the week for the period ending Sept. 19.

Baxter, a third-year back with the Stingers, stood out in Concordia’s 27-7 victory over the Sherbrooke Vert & Or on the road Sunday. The veteran winger scored two tries to help the team improve its win-loss record to 1-1 in the RSEQ conference. The win also helped the Stingers place ninth in the U Sports Top 10 rankings for the week.

A 21-year-old resident of Ajax, Ont., Baxter is an Urban Planning student at Concordia.

Roy, a third-year quarterback, led the Stingers to a dramatic come-from-behind 36-33 overtime victory over the McGill Redbirds in the 52nd annual Shaughnessy Cup game at Molson Stadium last Friday. With eight minutes left in regulation the Stingers trailed 33-11, but Roy threw three straight touchdown passes and scored a two-point convert to lead his team back.

He completed 18 of 29 passes for 299 yards with one interception and four touchdowns. He also carried the ball 10 times for 51 yards and the two-point convert.

His outstanding play also earned him the RSEQ’s Offensive Player of the Week award for the second consecutive week.