These two Stingers covered a lot of real estate on the weekend. 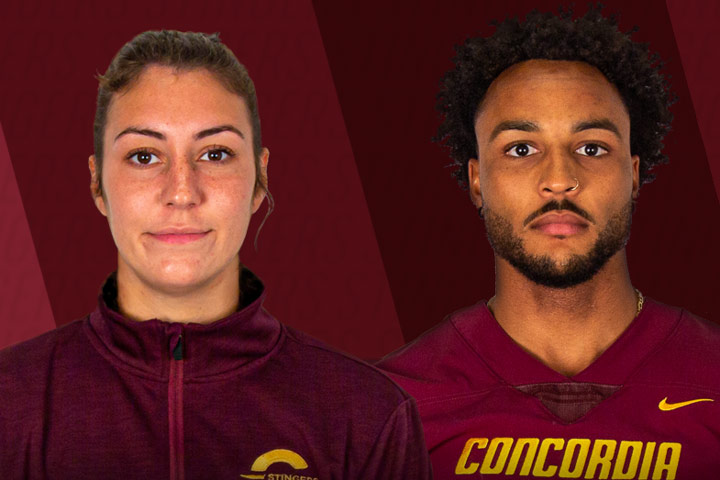 Ricciardi, Tyrrell - Athletes of the Week

Chloe Ricciardi of the women's soccer team and James Tyrrell of the football team have been named the Subway-Concordia Stingers athletes of the week for the period ending Oct. 20.

Ricciardi, a third-year defender, stood out in Concordia’s two games to close out the season. She set up the goal in the Stingers’ 1-1 tie with the No. 3-ranked Montréal Carabins at the Erica Cadieux memorial game last Friday. She also scored in a 2-2 tie with the UQTR Patriotes on Sunday.

A 24-year-old native of Kirkland, Que., Ricciardi is working on her Masters in Child Studies at Concordia.

Tyrrell, a fifth-year wide receiver, caught six passes for 102 yards to help his team defeat the Sherbrooke Vert & Or 27-19 last Saturday. With less than four minutes to play and the Stingers trailing by three points, Tyrrell made a 42-yard reception that gave Concordia a first down on Sherbrooke’s three-yard line. The Stingers scored on the next play, taking a 20-16 lead. They held on to win the game.

He was also named RSEQ Player of the Week on Offence.

Tyrrell leads the conference in receptions and yards. He has 48 catches for 704 yards in seven games.