Lester Gariba made a name for himself in his first year with the Stingers. 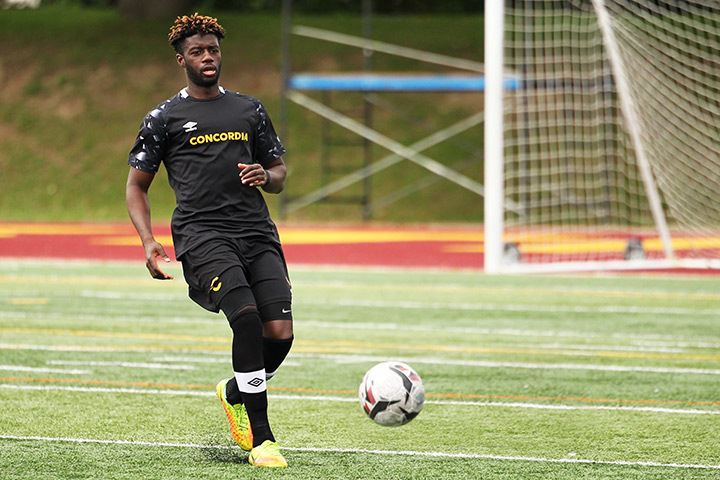 Five members of the Concordia soccer program were on the honour roll when the RSEQ announced its all-star and all-rookie teams this week.

Defender Lester Gariba is the sole Stinger to earn an all-star selection. He was named to the men’s second team. The Montreal native went to University of Nevada, Las Vegas, in 2018 but returned home to play with the Stingers in the RSEQ this season. He scored one goal in 11 matches and was named a game MVP three times.

Four Stingers were selected to the all-rookie teams. Keeper Julian Petrilli, forward Simon Spénard-Lapierre and mid-fielder John Cevic from the men’s team were honoured. From the women’s soccer program, Casey Koscher was named to the freshman team.

Petrilli comes out of the Dawson College program. He played in all 12 games, accumulating 1059 minutes. He was named the game MVP on two occasions.

Spénard-Lapierre , who developed at Collège Lionel-Groulx and with CS Fabrose, scored four goals in nine games with the Stingers. As well, he earned one game MVP honour.

John Cevik, another graduate of the Dawson Blues, played all 12 games with the Stingers in his rookie campaign. He earned two game MVP awards.

On the women’s side, Koscher was the only Concordia player to receive recognition from the conference. The rookie out of John Abbott College played in all 14 RSEQ games, scoring one goal.

The men’s season continues this weekend when the Stingers travel to UQTR to meet the Patriotes in a RSEQ semifinal game. It takes place on Sunday at 1 p.m. The winner will advance to the conference championship and face the winner the Montréal Carabins-Laval Rouge et Or semifinal.