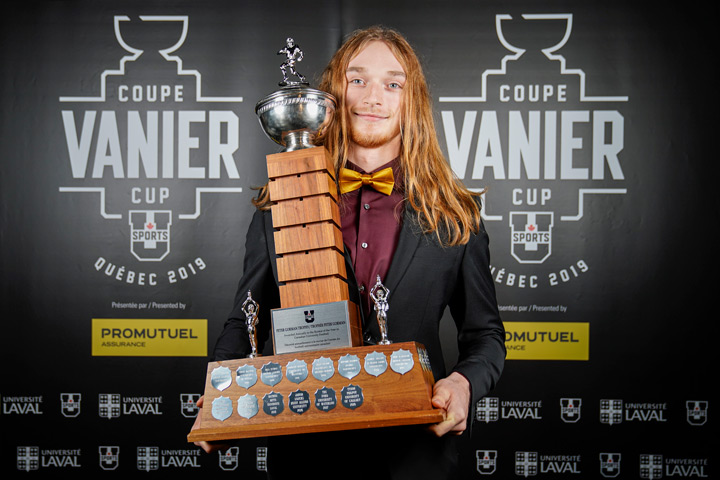 Although several Stingers have been nominated for the prestigious award, Murphy is only the second to win the Gorman Trophy which was initially presented in 1976. Quarterback/receiver Liam Mahoney was the first Concordia football player to get the nod in 2007.

Murphy joins an elite class of Canadian university football players from across the country that includes long-time CFLer Andy Fantuz (2002), Jerome Pathon (1993) of the Atlanta Falcons, Eric Lapointe (1995) of the Montreal Alouettes and Mike Soles (1986) also of the Alouettes.

The 20-year-old resident of St. Bruno de Montarville, Que. quickly became a major part of the Stingers’ offence in his freshman year. Murphy caught 34 passes for 491 yards and four touchdowns He led the RSEQ in receiving touchdowns, he was third in yards and fourth in receptions.

“I’m impressed with how he handled things in his first year of university football,” said Concordia head coach Brad Collinson. “His competitiveness makes him lethal. He believes he can run every route and catch every ball. He usually plays against the best defensive backs on the other teams. Even when he became more familiar to the teams around the league, they couldn’t stop him.”

Murphy developed a good rapport with Stinger receiver coach Seydou Junior Haidara which helped him develop at the university level.

“He’s really flourished working with Seydou,” Collinson said. “I think Jeremy is going to be a big part of our offence going forward. His ceiling is still very high. He hasn’t reached his potential. I’m excited about his future.”

Murphy comes out of the Champlain College, St. Lambert, football program. With the Cavaliers he played receiver, quarterback, defence, and special teams. At the Cégep level, he was an all-star receiver and the league’s MVP on offence.