Kyle Jessiman has been creating a lot of buzz with his exceptional play. 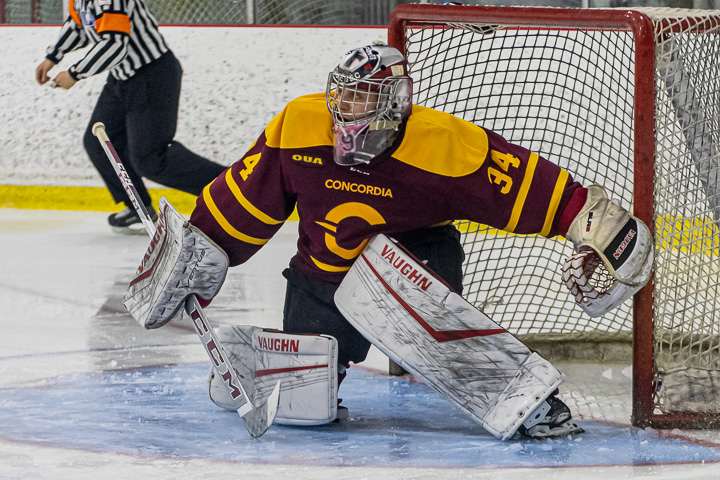 With a 3-1 victory over the Carleton Ravens on Saturday night at the Ed Meagher Arena, the Concordia Stingers men's hockey team advances to the third round of the OUA playoffs for the second time in three years.

Coupled with a 4-3 win in triple overtime last Wednesday in Ottawa, the Stingers sweep the Ravens who were the No. 3-ranked team in U Sports and the top seed in the Ontario East conference.

After 28 minutes of scoreless hockey, Concordia broke out with a flurry of goals in the second period. Rookie defenceman Gabriel Bilodeau opened the scoring at 8:13 and then veteran centre Jean-Philippe Beaulieu scored back-to-back goals at 15:05 and 19:24 to give the Stingers a 3-0 lead after 40 minutes.

Carleton’s lone goal came from Sam Mesenheimer at 13:27 of the third period.

Stinger goaltender Kyle Jessiman turned away 30 of 31 shots to secure the win. He made several fan-pleasing saves, prompting the enthusiastic crowd to break into chants of “MVP, MVP”.

Jessiman is the top goaltender is the OUA playoffs. He’s logged 358 minutes over five games and has a 1.85 goals-against average.

In the next round, the Stingers will play a best-of-three series with the Ottawa Gee-Gees. Dates and times for those games will be announced shortly.

The last time the Stingers made it to the OUA East final was in 2018. That season Concordia met McGill University and lost the series, but still earned a spot in the OUA bronze medal game and advanced to the national championship for the first time since 1984.