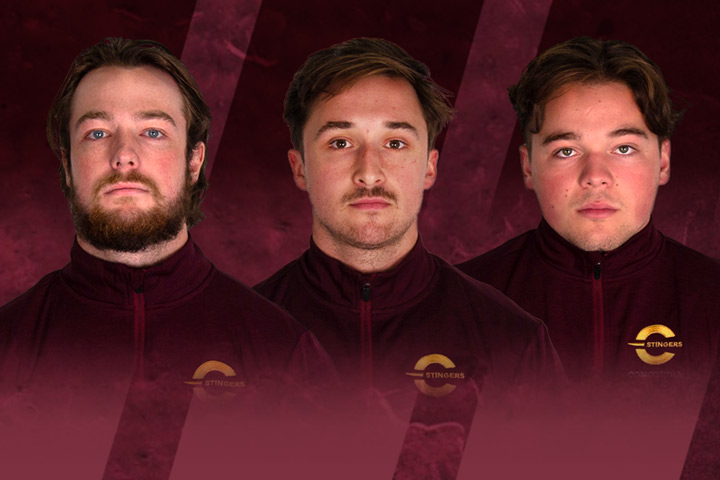 Three members of the Concordia Stingers men's hockey team were among the honourees when the OUA announced its all-star teams on Thursday.

First-year left wing Tyler Hylland leads the way with two awards. He was named to the OUA East second all-star team and to the conference all-rookie team.

The Mercier, Que. native led the Stingers in scoring with 13 goals and 17 assists for 30 points in 28 games. He scored four shorthanded goals, the most in U Sports men’s hockey, and two power-play goals. Hylland also has six goals in seven playoff games.

The 21-year-old forward came to the Stingers from the Blainville-Boisbriand Armada of the Quebec Major Junior Hockey League.

Defenceman Carl Neill, 23, earns his third all-star honour in as many years. He is a second-team all-star. The previous two seasons he was named to the first team.

A native of Lachute, Que., he scored six goals and added 14 assists for 20 points in 25 games. He’s also added two goals and two assists for four points in seven playoff games. Neill scored the game-winner in triple overtime to give Concordia a 4-3 victory over the Carleton Ravens in Round 2 of the playoffs. His goal ended the longest men’s hockey playoff game in OUA history.

Bilodeau, a defenceman from Laval, Que., earns his first university honour. He was voted to the all-rookie team. He scored two goals and added 13 assists for 15 points in 27 regular season games. The 21-year-old also has one goal and four assists in seven playoff games. He comes out of the Gatineau Olympiques program in the QMJHL.

The Stingers travel to London, Ont. to face the Western Mustangs on Saturday at 3 p.m. The winner earns the OUA bronze medal and a berth at the national championship March 12-15 in Halifax.