Colin Grannary and the Stingers will face the Western Mustangs. 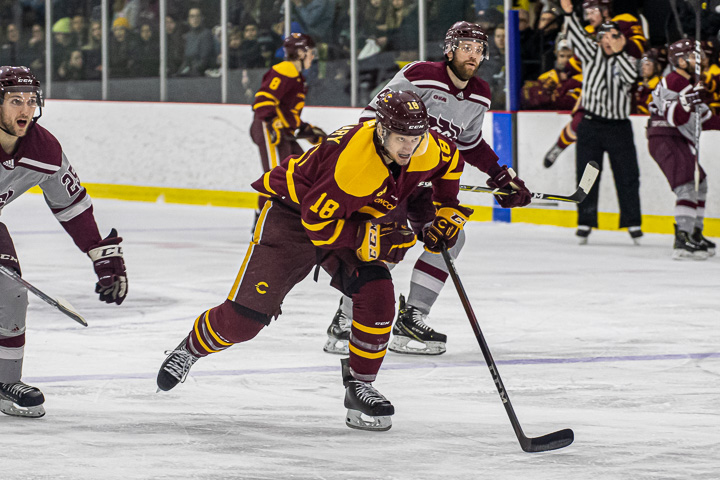 When the Concordia Stingers men's hockey team battles the Western Mustangs in the OUA bronze medal game on Saturday in London, Ont., it will be the first meeting between the teams since Oct. 26, 2018.

Twelve of the 26 players on the Stingers’ playoff roster have never played Western. But head coach Marc-André Elément and his staff have put a lot of time in watching video and game-planning. They have definitely familiarized themselves with the Mustangs.

“They have a good goaltender and they are solid on offence and defence,” said Elément who was treading carefully, keeping his cards close to his vest. “They are big and fast. It will be a good game.”

Going back 10 years the teams have met nine times. They split four preseason games, and in five regular season meetings, Western has the advantage with two wins, two overtime wins and a loss, including a 4-0 victory in the last game in 2018.

This season, Western finished in eighth place in the 10-team OUA West conference with an 11-13-4 record. The Stingers were fifth in the OUA East with a 13-10-5 performance.

In the playoffs, the Mustangs eliminated the top-seeded Toronto Varsity Blues and the Ryerson Rams - each series went to three games - in the first two rounds of the playoffs. They fell to the Guelph Gryphons in Round 3 and that was also a three-game series.

The winner of Saturday’s bronze medal game will earn a berth at the U Sports championship in Halifax March 12-15.