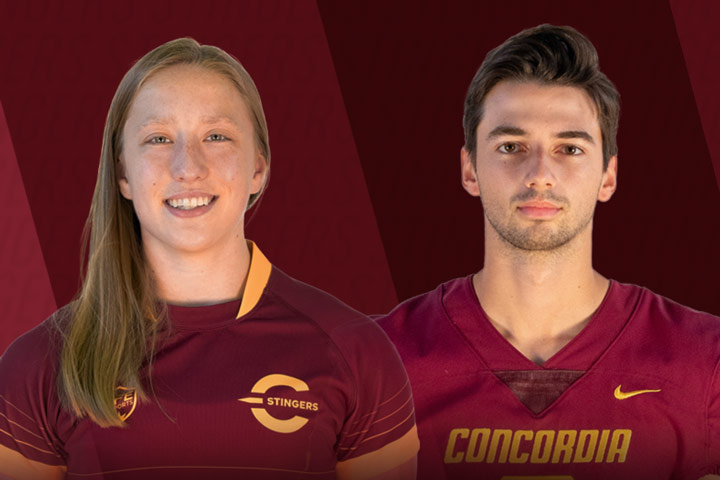 Robinson, Roy - Athletes of the Week

Mahalia Robinson of the women's rugby team and Olivier Roy of the football team have been named the Subway-Concordia Stingers athletes of the week for the period ending Sept. 26.

Robinson, a second-year back with the Stingers, stood out in Concordia’s 46-15 victory over the Sherbrooke Vert & Or in the 17th annual Kelly-Anne Drummond Cup on Sunday. She scored one try and connected on three converts for 11 points in the game. A dynamic playmaker, she led by example on both sides of the ball contributing on attack by scoring and on defence by making try-saving tackles.

A 22-year-old resident of Fulford, Que., Robinson is a Therapeutic Recreation student at Concordia.

Roy, a third-year quarterback, threw five touchdown passes and a RSEQ record 580 yards to lead the No. 10-ranked Concordia Stingers to a 42-39 overtime victory over the Sherbrooke Vert & Or on Saturday.

At the U Sports level, Roy now owns the second-best performance on record. Greg Vavra from the Calgary Dinos is in first place. He threw for 627 yards versus the Saskatchewan Huskies on Oct. 7, 1983.

His outstanding play also earned him the RSEQ’s Offensive Player of the Week award for the third consecutive week.