Mohammad Reza Nafar (left) and Anthony Phelps were honoured at a U Sports gala. 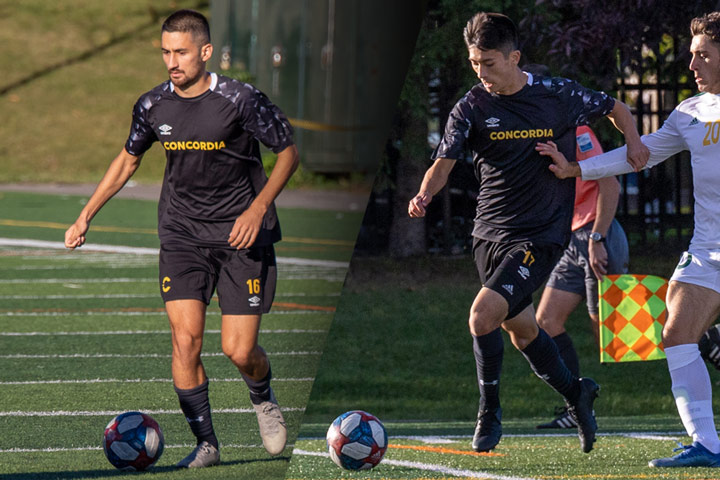 U Sports celebrated its men’s soccer award winners at the 2021 all-Canadian gala held Wednesday in Ottawa, and two members of the Concordia Stingers were on the honour roll.

Forward Mohammad Reza Nafar was named a second team all-Canadian. The Montrealer was the leading scorer in the RSEQ conference with seven goals and four assists for 11 points in 12 games. He earned four Player of the Game honours this season.

Nafar was with the Western Mustangs for three seasons and completed a BSc. with a major in Financial Modelling. He returned home to Montreal and joined the Stingers in August. He is currently enrolled in the Supply Chain Management MSc. program.

This is the first all-Canadian men’s soccer honour for the Stingers since forward Andrew Bryan was named to the second team in 2012.

Anthony Phelps, a midfielder originally from Halifax, was named to the U Sports all-rookie team. He was the RSEQ Rookie of the Year and a first team conference all-star.

He scored two goals in 12 games this season. He was named Player of the Game on two occasions. He is most famous for scoring the lone goal in a 1-0 victory over the first-place Montréal Carabins, who were the No. 1-ranked team in the country at the time.

Phelps is the third Concordia player to earn all-rookie honours. Current teammate Simon Spénard-Lapierre (2019) and Simon Malaborsa (2017) are the previous honorees. U Sports added the all-rookie component to its soccer awards in 2017.