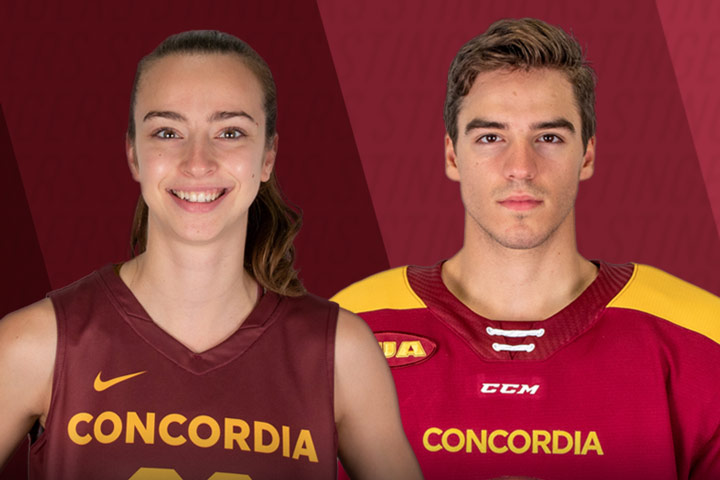 Leclerc, Tremblay - Athletes of the Week

Myriam Leclerc of the women's basketball team and Charles Tremblay of the men's hockey team have been named the Subway-Concordia Stingers athletes of the week for the period ending Feb. 20, 2022.

Leclerc, a third-year guard, made a statement when her team took to the court for the first time in 2022. In two victories over the Laval Rouge et Or last week, she scored 49 points and hauled in 12 rebounds. She was also a perfect 20 for 20 from the free-throw line. Her efforts helped the Stingers improve their win-loss record to 4-2 and move into a two-way tie for first place in the RSEQ standings.

A 24-year-old resident of St. Roch de Richelieu, Que., Leclerc is an Accouting major in the John Molson School of Business.

Tremblay, a rookie right wing, was instrumental in helping the Stingers start off the second half of the season with a bang. He scored a goal and added two assists to lead Concordia to a 7-4 victory over the McGill Redbirds last Tuesday. This season, he has two goals and eight assists for 10 points in nine games and is tied for the scoring lead on the team.