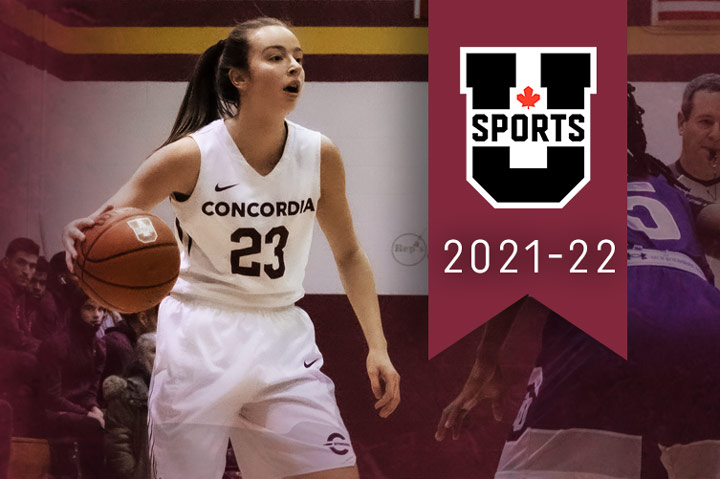 Concordia Stinger guard Myriam Leclerc was named the recipient of the Tracy MacLeod Award, recognizing courage in overcoming adversity, and she was named to the first all-Canadian team at the U Sports women's basketball gala in Kingston on Wednesday night.

Leclerc, a fourth-year Accounting major from St. Roch de Richelieu, Que., is the only women’s basketball player in Concordia history to earn to more than one major U Sports award. She was also the national Rookie of the Year in 2019.

Stinger M.J. Raposo is the only other Stinger to earn major national recognition. She was the recipient of the Sylvia Sweeney Award for student-athlete community service in 2005

Leclerc tore her ACL in the 2019-20 season. Due to the COVID-19 pandemic her surgery was pushed back multiple times and her recovery delayed. However, she was relentless in her devotion to her rehabilitation and was determined to come back stronger than before.

“Myriam is once again one of the most dominant players in our conference and across the nation,” said Concordia head coach Tenicha Gittens. “It is a true testament to her work ethic, determination and perseverance.”

This season, the three-time RSEQ all-star played all 12 conference games and averaged 6.3 rebounds and 16 points, which ranked third in the conference. She was first in the RSEQ in minutes played (35.6), steals (2.6) and free throws, sinking 47 of her 49 attempts. Her .959 free-throw percentage was good for first in the country.

This is Leclerc’s second all-Canadian honour. She made the second team in her rookie season.