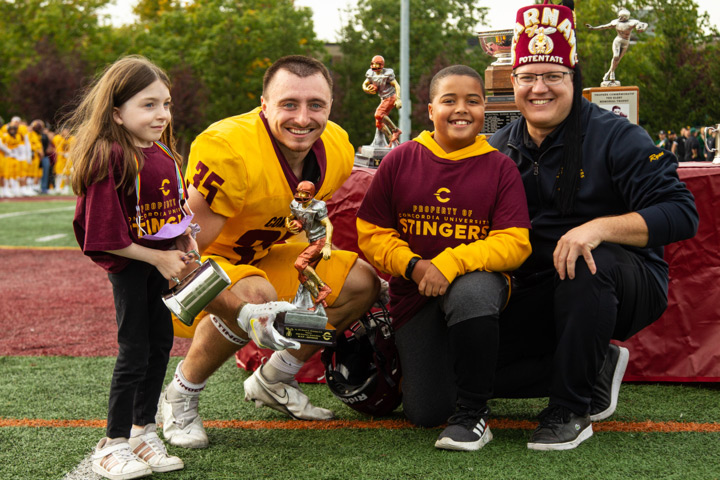 Shrine Bowl: the biggest stars were not the football players

While the Concordia Stingers football team suffered a tough 38-14 loss to the Sherbrooke Vert & Or on Saturday, the day was about more than touchdowns and tackles.

It was the 34th edition of the Shrine Bowl – Canada, and the game was played to honour the strength and courage of the children who are patients and ambassadors for the hospital. It was also a way to recognize all the exceptional work the hospital staff and supporters do to help make things better for the children.

Many of the fans in the stands on Saturday had a connection to the hospital, including Arthur Herrera-Charbonnier, 12, and Emma Ryan Corbett, 8, two young ambassadors for the Shriners.

Arthur, who did the ceremonial kickoff at the game, loves sports. As a young boy, he dreamed of becoming a professional hockey player. However, Arthur was born prematurely at 30 weeks. When he first began to walk, he walked on the tip of his toes. It was discovered that Arthur had a perinatal stroke resulting in mild cerebral palsy on his right side. It was shortly after his diagnosis that Arthur began his journey at the hospital. He underwent an Achilles tendon lengthening to make his right ankle more mobile. Arthur exercises every day at home or with his physiotherapists to strengthen his right leg. This has allowed him to walk, ride a bike and play baseball.

Emma was born with severe congenital scoliosis, a condition that causes a curve in the spine. The shape of Emma's spine puts pressure on her lungs, causing respiratory issues. She uses a back brace and a specially-padded chair to help her sit straight and alleviate the pain. She takes daily medication and uses a sleep apnea machine at night to help her with breathing. Emma is growing and making progress and her body is adapting. Despite the steady pain, she loves to dance, do gymnastics and to ride her bicycle

“They look up to us, but I look up to them,” said star receiver Jaylan Greaves who scored one of the Stingers’ touchdowns in the game. “I’ll do anything to see those smiles.”

A Shrine Bowl tradition is to acknowledge the outstanding players in the game. Arthur and Emma came out on the field after the game to help with the trophy presentations. This year the honourees were: