From left, Tyler Hylland, Rosalie Bégin-Cyr and captain Emmy Fecteau with their medals. 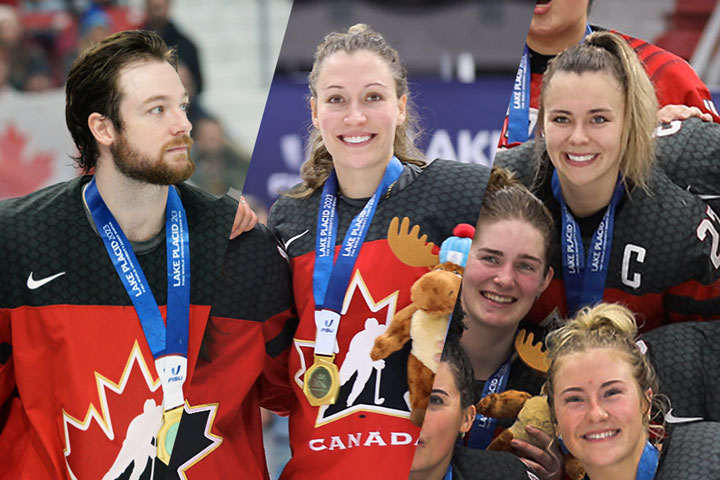 Emmy Fecteau and Rosalie Bégin-Cyr earned gold medals as members of the Canadian women’s hockey team, and Tyler Hylland received his medal as a member of Canada’s entry in the men’s hockey competition.

On the women’s side, Canada defeated Japan 5-0 in the championship game on Saturday night at the Herb Brooks Olympic Center. The victory wrapped up a dominating performance that saw the team go undefeated in seven games and outscore its opponents 42-3.

The Canadians also won a gold medal in 2011 when former Concordia head coach Les Lawton was at the helm of the team during the 25th Winter Universiade in Erzurum, Turkey.

Canada’s men’s team defeated the U.S. 7-2 before a packed house at the Olympic Center on Sunday night. Hylland scored the final goal of the gold medal game. The men’s team was also undefeated in seven games, outscoring its opponents 48-8 in the tournament.

Canada had a bronze medal performance at 2019 Winter Games in Krasnoyarsk, Russia, and last won gold in 2013 in Trentino, Italy.

Overall, Canada earned 13 medals and finished tied with Germany in sixth place at the Winter Games. Japan finished in first place with 48 medals. Twenty-four countries reached the podium, earning at least one medal.

The competition is the largest international winter multi-sports event for student-athletes with more than 2,500 participants from more than 50 countries.