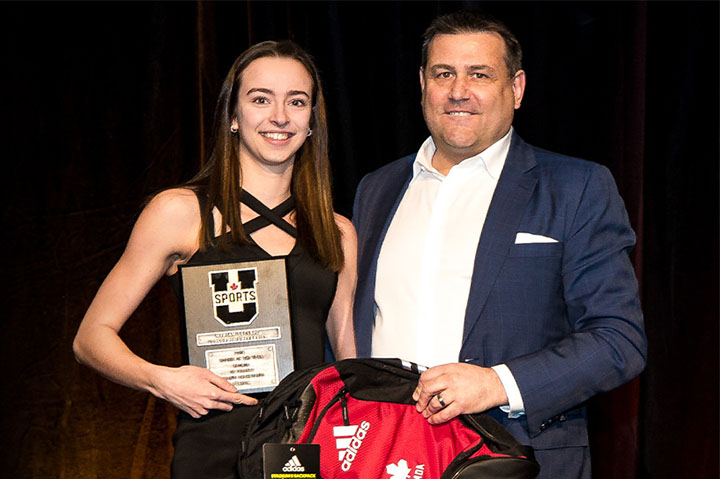 Myriam Leclerc named U SPORTS Rookie of the Year

With her team in attendance and cheering her on, Leclerc captured the Kathy Shields Award as U SPORTS Rookie of the Year, she was named a second team all-Canadian and she was also a member of the all-rookie team.

Leclerc, a five-foot-10 guard from St. Roch de Richelieu, Que. had a significant impact on the Concordia basketball program and the RSEQ in her first season. The 21-year-old, played all 16 games averaging 36.6 minutes of playing time. She was the leading scorer in the league with 18.8 points per game and led the conference in steals with 2.5 and assists with 4.6 a game.

As a member of the Cégep de Saint-Foy Dynamiques in 2017-18, the Accounting major was one of the top players in Quebec. She was a college all-star who averaged 19.1 points a game.

“To come in as a freshman and put up the numbers that she has put up on a weekly basis is pretty special and she is very deserving of the accolade,” said Concordia head coach Tenicha Gittens.”

“She plays with such confidence and poise. She settles everyone down and really runs the show.”

Leclerc is only the second Concordia women’s basketball player to earn a national award. In 2005, M.J. Raposo won the Sylvia Sweeny Award, which is presented annually in recognition of commitment to community service initiatives.

Leclerc and the Stingers earned a wildcard berth to compete in the national championship hosted by Ryerson University tomorrow through Sunday. They open with a quarterfinal game versus the McMaster Marauders tomorrow at noon.

The games will be streamed at  https://usports.live

You can get updates on Twitter from @the_stingers and @USPORTS_Bball