Stinger Léonie Philbert (centre) and her family at home in St. Bruno. 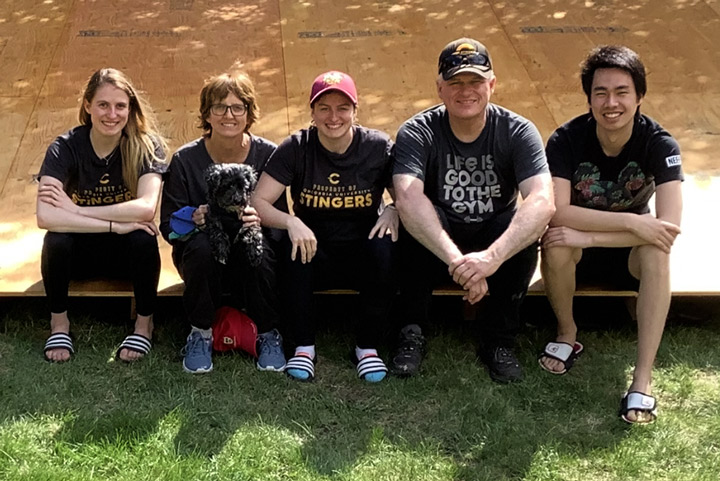 Enduring the COVID-19 pandemic and social isolation is challenging for everyone. To help inspire us, Léonie Philbert, a centre who just completed her first season with the Concordia Stingers women's hockey team, graciously shares her personal story of courage and triumph over tragedy.

Léonie was diagnosed with a brain tumor in 2009. She went through an intense treatment plan - surgery, chemotherapy and radiation. She won the war but she still deals with the effects of the treatments and is considered “a bit fragile” during this pandemic. However, lessons learned and her fighting spirit won’t allow these trying times to get her down.

Léonie was just nine years old when she came home from school and told her parents, Véronique Graton and Guy Philbert, that everything was black in her left eye. The next day she saw an optometrist who immediately sent her to the emergency room at the Montreal Children’s Hospital.

“There was a mass of the size of a plum situated in the optic pathways,” explained Léonie. “It was a brain tumor leaning on my left optic nerve, which caused a vision loss in my left eye.“It was only a matter of time before it got to my other optic nerve and then to my brain. We met a neurosurgeon who told us that a surgery had to be done in less than a week. The quicker, the better.”

The team at the hospital realized they had a young athlete in their care. Léonie liked tennis and hockey, and loved soccer and the Montreal Impact. They knew exactly what to say to encourage her.

“In the next months, you will have an important game to play,” said one of the doctors. “Your opponent will be tough, but you won’t be alone. We are a big team behind you and we will win this game all together.”

Léonie drew strength from the support at the hospital and from her parents and siblings – Zoé, Alice and Rémi.

“At first, I was afraid: afraid of dying, of the unknown, of the uncertainty,” Léonie said. “I was wondering what I did wrong and why this was happening to me. However, I was competitive and I wanted to be strong for my family. I talked with my parents and our way of thinking was based on two quotes: ‘Impossible is nothing’ from Adidas and ‘One day at a time.’

Léonie is still followed by medical specialists, and the effects of radiotherapy still impact her life.

“The most important part is that my life is not in danger,” she said.

Her challenges didn’t stop her from playing elite hockey and pursuing her university education. She will start her second year of studies in Pure and Applied Math is September and her long-term goal is to be a teacher at the Cégep level.

Léonie joined the Stingers in 2019 after a successful three-year career at Dawson College. She plays alongside her sister Alice, a goaltender, who came to Concordia in 2017.

“I’m careful not to take things for granted,” said Léonie. “I always try my best in school and sports. I’m so lucky to be able to play university hockey with our coaches Julie Chu and Caroline Ouellette. I’m also lucky to have three years to play with my sister.”

Until we can return to a more normal life, Léonie is enjoying the time with her family at home in St. Bruno de Montarville, Que. They play a lot of board games, and she is eagerly awaiting the arrival of synthetic ice rink so she and Alice can train for the coming hockey season.