The former all-Canadian will develop her skills under the direction of Tenicha Gittens. 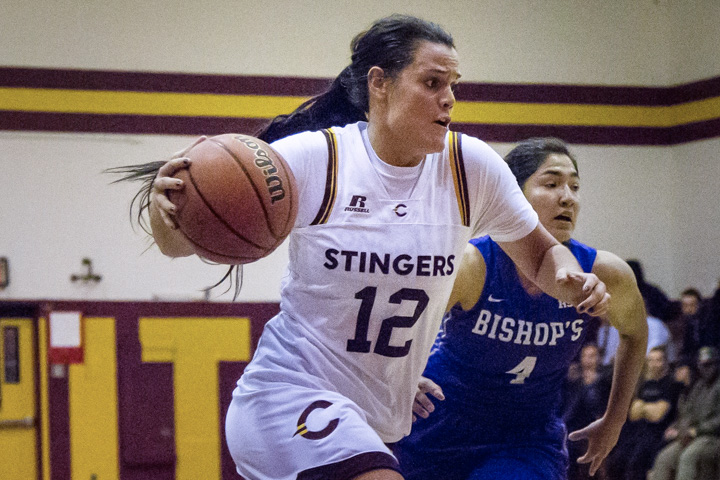 In honour of International Women's Day, the Concordia Department of Recreation and Athletics is pleased to announce Richelle Gregoire, a former all-Canadian with the Stingers women's basketball program, has been selected for the 2022-23 U Sports Female Apprentice Coach Program.

Gregoire will begin her U Sports apprenticeship on April 1 and will be mentored by Concordia head coach Tenicha Gittens.

Originally from Ste. Therese, Que., the talented forward played five years with the Stingers (2012-17). A respected competitor, she was known for her intensity on the court and her dedication to the Stingers women’s basketball program.

Gregoire was the leading scorer in the RSEQ in 2016-17 with an average of 16.9 points a game. She was named a U Sports second team all-Canadian and a Quebec all-star, her second consecutive conference recognition.

In 2021-22, Gregoire joined the Stingers staff as an assistant coach.

The U Sports program, now in its third year, aims to increase the number of females in coaching positions across Canadian universities by matching apprentice coaches, who have recently graduated, with a head coach in one of its sports.

A total of 37 applications were received for the 2022-23 edition of the program, with 18 apprentice coaches selected. All participants will be members of the coaching staffs at their respective schools and where possible, will provide feedback to colleagues as well as student-athletes, while taking part in team activities.Each apprentice coach will also attend at least one National Coaching Certification Program (NCCP), with the option to also take additional professional development courses and seminars in the field of coaching.

This is the second consecutive year, a young Concordia coach has earned a place in the program. Erica Porter is currently wrapping up her apprenticeship with the Stingers women’s hockey program.