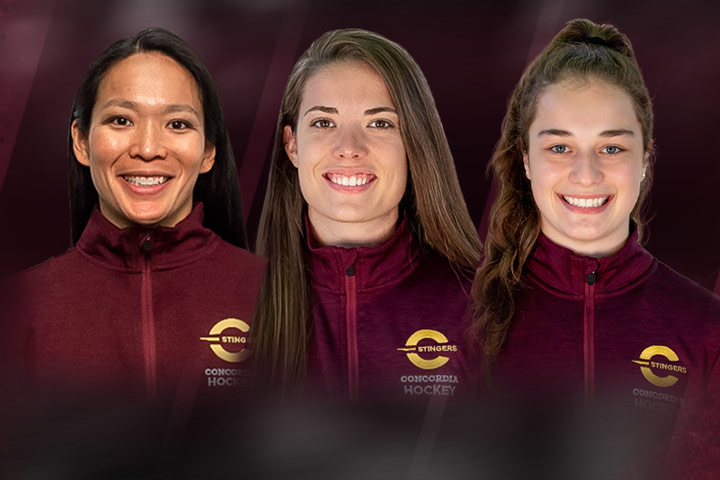 Three members of the Concordia Stingers received some of the RSEQ conference’s most coveted women's hockey awards this season, including head coach Julie Chu.

Chu, who took over the leadership of the Stingers’ program in June of 2016, was named the Coach of the Year. She led her team to an 11-3-1 win-loss-overtime loss record and second place in the conference. The team is currently riding an eight-game winning streak and holds the No. 2 spot in the U Sports rankings.

“Julie and her staff are very deserving of this recognition,” said Concordia Director of Recreation and Athletics D’Arcy Ryan. “To be able to put together such strong campaign during these turbulent times is impressive. I’m very proud of what the team has accomplished.”

Joining Chu on the honour roll are graduating defender Brigitte Laganière who is the recipient of the league’s Leadership and Community Engagement Award and forward Émilie Lavoie who was named the RSEQ Rookie of the Year.

Laganière of Anjou, Que. will be the Quebec nominee for the Marion Hilliard Award presented annually to the U Sports women’s hockey player who best combines hockey prowess, academics and community involvement.

She just received her third straight all-star honour. She played all 15 games for the Stingers and finished fifth in league scoring with three goals and 14 assists for 17 points. The assistant captain was the top scoring defender in the conference.

Laganière was a 2020-21 academic all-Canadian and is currently working on a Graduate Diploma in Business Administration.

Lavoie of Beloeil, Que. had a significant impact in her rookie campaign. She played all 15 games, collecting eight goals and eight assists for 16 points. She was the sixth best scorer in the conference and the highest scoring rookie

She is a graduate of Cégep Édouard-Montpetit where she was a RSEQ all-star in 2019-20.