Second-year defenceman Marcus Tesink is one of just six veterans on the team. 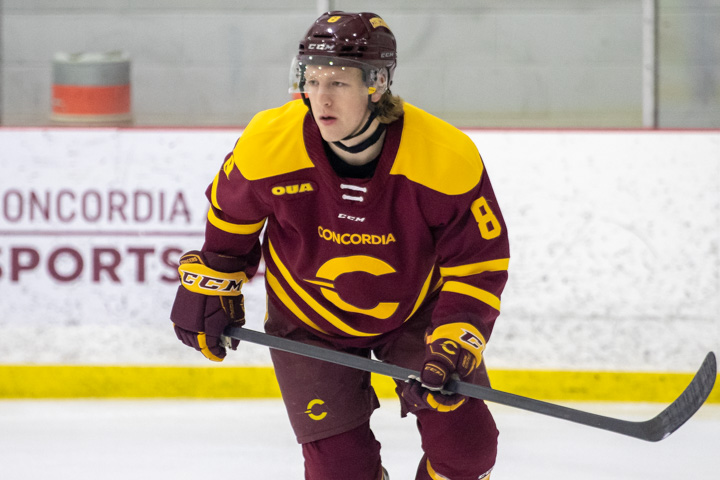 Despite a lengthy COVID-19 pause in the middle of the season and the departure of several veterans who turned pro during the government-mandated shutdown, the Concordia Stingers men's hockey team persevered and then some.

The Stingers posted a 5-2 win-loss record in the second half of the season and finished 2021-22 with a winning percentage of .600. Playoff positions were decided by that percentage, and Concordia ranked third out of the nine teams in the OUA East and Far East conferences which merged for post-season play.

As the No. 3 team, Concordia earned the right to host the sixth-ranked Ontario Tech Ridgebacks. That game, a sudden-death quarter-final, takes place this Wednesday night at the Ed Meagher Arena.

“I’d say the instability forced us the put an emphasis on being the best players we could be in the moment,” said assistant captain Alex Katerinakis. “We were able to focus on being the best team on the ice 60 minutes at a time and now we’re peaking as a team.”

Head coach Marc-André Elément had to do extra recruiting over the holidays to help fill some gaps but when action résumed in the middle of February, the Stingers had 26 student-athletes in the program. The amazing part of that is 20 of those players are in their first year of university hockey eligibility.

“You have to disregard what the roster says,” Katerinakis explained. “We’re a group of guys that enjoy playing hockey together. We spend a lot of time together outside the rink and we put a lot of effort into getting to know each other. That has translated to success on the ice. We’ve all bought into the system. We’re on the same page. Everyone brings something to the table.”

Most teams in the OUA lost players during the COVID-19 shutdown, including Ontario Tech, and had to adapt. The Ridgebacks currently list 12 rookies of their 24-man roster. Since returning to action in February, the Ridgebacks compiled a 3-5 win-loss record. They were 5-4 before the stoppage.

Concordia and Ontario Tech last met in the playoffs in 2017-2018. The Stingers took the best-of-three opening round series in two straight games. Concordia went on to win the OUA bronze medal game and earn a berth at the national championship for the first time since 1984.