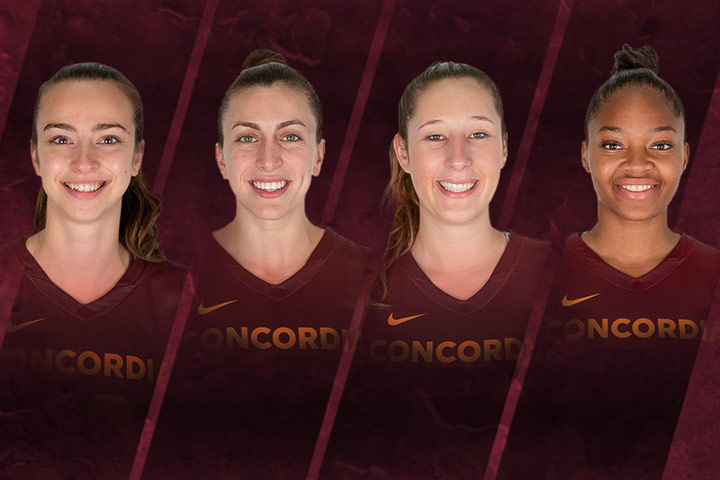 Four members of the Concordia Stingers were on the honour roll when the RSEQ announced its women's basketball all-star and all-rookie teams for the 2021-22 season on Tuesday afternoon.

Leclerc earned her third consecutive first team all-star award. This season, she played all 12 games and averaged 6.3 rebounds and 16 points, which ranked third in the conference. She was first in the RSEQ in minutes played (35.6), steals (2.6) and free throws, sinking 47 of her 49 attempts. Her .959 free-throw percentage was good for first in the country.

Task earned her fifth conference honour in as many years. She was also named to the first team in 2019. She was a second team honouree is 2018 and 2020. She started her university career as the RSEQ’s Rookie of the Year in 2017. This season she played 12 games and was fifth in league scoring with an average of 14 points. Task was lethal beyond the arc, finishing second in the conference in three-point percentage (.419).

Dumont earns her first all-star honour, but she was the top rookie in 2018. She was fourth in league scoring with 14.5 points a game while averaging 6.4 rebounds. She blocked 15 shots in 12 games (1.3) to lead the conference.

In her first season at the university level since coming out of the Cégep Édouard-Montpetit program, Tchida played an average of 20.2 minutes over 12 games. She averaged 6.8 points and 4.5 rebounds a game.

Major awards were also announced, and the Stingers took three of the big honours. Tenicha Gittens was named Coach of the Year, Nelly Owusu is the recipient of the RSEQ Leadership and Social Engagement Award. Leclerc is the Quebec nominee for the Tracy MacLeod Award, presented annually by U Sports to the player who best demonstrates courage overcoming adversity.