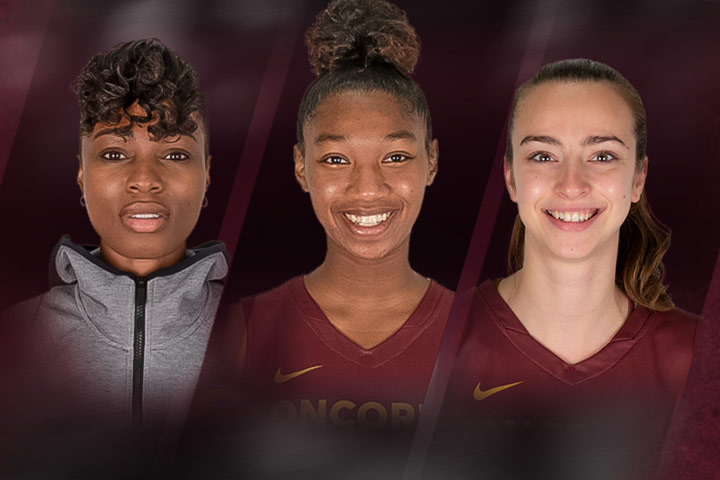 Three members of the Concordia Stingers received some of the RSEQ conference's most prestigious women's basketball awards this season, including head coach Tenicha Gittens.

Gittens, who took over the leadership of the Concordia program in July of 2015, was named the Coach of the Year. She led her team to a 9-3 win-loss record and first place in the conference. It was the first regular season title for the Stingers since 1998-99.

“My congratulations to Tenicha and the women’s basketball staff on this well-deserved recognition,” said Concordia Director of Recreation and Athletics D’Arcy Ryan. “They put together a strong campaign under difficult circumstances and I’m excited about the first-place finish and looking forward to the playoffs.”

Joining Gittens on the honour roll are graduating forward Nelly Owusu who is the recipient of the league’s Leadership and Community Engagement Award and senior guard Myriam Leclerc who is the RSEQ nominee for the U Sports Tracy MacLeod Award.

Owusu will be the Quebec nominee for the Sylvia Sweeney Award presented annually to the U Sports women’s basketball player who best combines basketball skills, academics and community involvement.

She played all 12 games this season, averaging 7.2 points and 4.7 rebounds.

A Montrealer, she is in her fourth year of Concordia’s Child Studies program. This past semester, she volunteered her time at the Donald Berman Yaldei Developmental Centre working with special needs children.

She spearheaded the Black Lives Matter movement for student-athletes in the RSEQ and encouraged others to speak up and use their platforms to affect change.

“Nelly truly embodies what it means to be a student-athlete,” Gittens said. “To thrive despite injuries and being unselfish with your time and giving back to your communities for no other reason but to see change and a need to do so.”

Leclerc, a fourth-year Accounting major, is the Quebec conference nominee for the MacLeod award that recognizes courage in overcoming adversity.

The 2022 first team all-star tore her ACL in the 2019-20 season. Due to the COVID-19 pandemic her surgery was pushed back multiple times and her recovery delayed. She was relentless in her devotion to her rehabilitation and was determined to come back stronger than before.

“Myriam is once again one of the most dominant players in our conference and across the nation,” said Gittens. “It is a true testament to her work ethic, determination and perseverance.”

This season, she played all 12 games and averaged 6.3 rebounds and 16 points, which ranked third in the conference. She was first in the RSEQ in minutes played (35.6), steals (2.6) and free throws, sinking 47 of her 49 attempts. Her .959 free-throw percentage was good for first in the country.