The Stingers celebrate a 4-0 victory in the gold medal game on Sunday night. 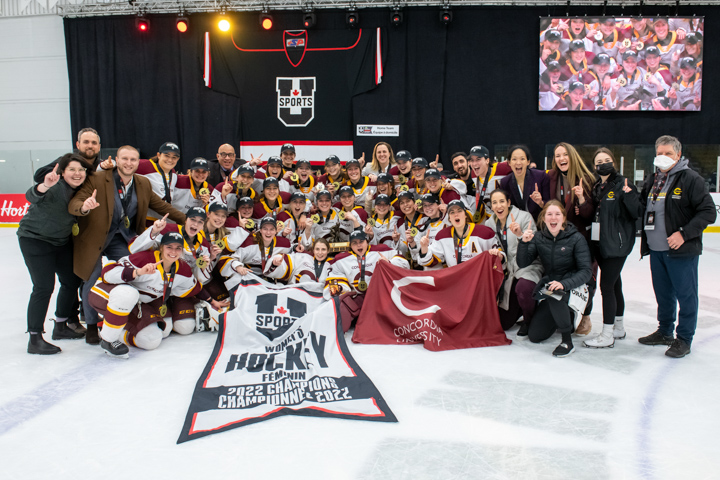 The Stingers won a hard-fought battle with the Nipissing Lakers 4-0 to earn the Golden Path Trophy and raise the championship banner.

This is the third goal medal for the Stingers. Concordia won the first two championships in U Sports history, defeating the University of Toronto 4-1 in the inaugural tournament in 1998 and repeating the feat with a 2-0 victory over University of Alberta in 1999.

The Stingers’ medal count stands at five as they have two bronzes to their credit as well, earning them in 2000 and 2018. In total, Concordia has reached the championship tournament nine times and won five medals.

The Lakers did not make it easy on the Stingers. The team, from North Bay, Ont., came out hard and had the Stingers back on their heels in the early going. After 20 minutes, the game was scoreless and Nipissing had outshot Concordia 9-7.

The tides began to shift when Stinger left wing Maria Manarolis banged her own rebound past Laker goaltender Chloe Marshall, who had not allowed a goal in her first two tournament games, to open the scoring at 2:51 of the second period.

Lalancette, a right winger who was named the tournament MVP, scored an unassisted goal at 2:51 of the third period. Captain Audrey Belzile struck at 13:05 to put the game out of reach. Lalancette’s second goal was an empty-netter in the dying minutes. She completed the tournament with two goals and three assists for five points in three games. The graduating senior was named the player of the game.

The final shots on goal were 37-25 for the Stingers.

Philbert was named to the tournament all-star team. She was outstanding in all three victories. She turned away 59 shots in total to earn the three shutouts.

Belzile also made the honour roll. The captain scored three goals in the tournament, one in each game.