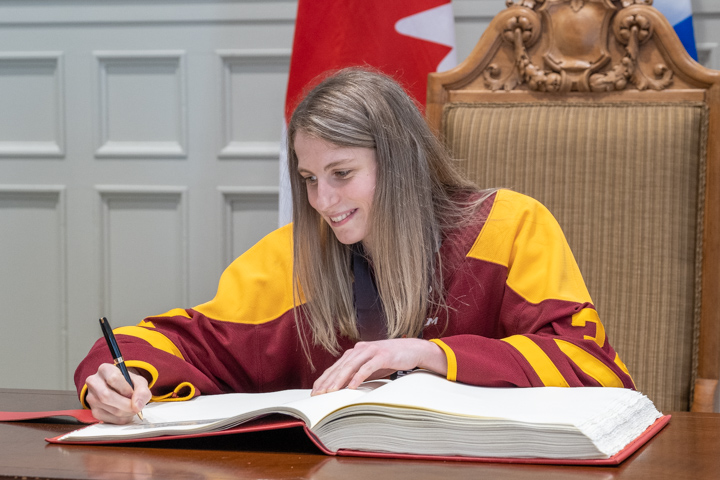 Concordia assistant captain Alexandra Boulanger presented the mayor with an autographed Stingers jersey and then the members of the team were invited to sign Montreal’s Gold Book.

It’s an exceptional honour to have one’s signature in the book. The 2022 Stingers join an exclusive group that includes talented alumni from the Montreal Expos who were invited to sign in 2019 marking the 50th anniversary of the baseball team. Manager Felipe Alou and pitchers Dennis Martinez and Tim Burke took part in the ceremony.

From the world of entertainment actor William Shatner, singer Céline Dion and the band Arcade Fire have all signed. Actress and producer Mary Pickford, who Wikipedia refers to as one of the most recognizable women in history, put her name in the book in 1948.

American astronauts from Apollo 11, the first space craft to land on moon, are also in the book. They signed in 1969.

More recently global activist Greta Thunberg joined Mayor Plante at City Hall in 2019 and was invited to sign the book.

It’s not the first time the Stingers women’s hockey team has been invited to celebrate an accomplishment at City Hall. In 1998 Mayor Pierre Bourque met the team and invited the gold medallists from the inaugural Canadian university women’s championship to a signing ceremony.

This year the Stingers, who won a hard-fought battle with the Nipissing Lakers to earn the Golden Path Trophy and raise the U Sports championship banner on March 27 in Charlottetown, P.E.I., have also been honoured by the Quebec national assembly, the Montreal Canadiens and by many community hockey teams and organizations.