From left, Fecteau, Hylland and Bégin-Cyr have been big contributors with Team Canada. 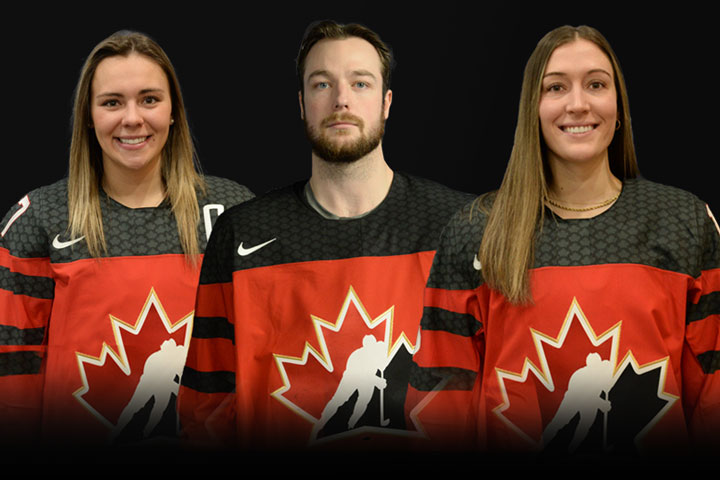 Three members of the Concordia Stingers hockey teams are gearing up for gold medal games at the 2023 FISU World University Games in Lake Placid, N.Y. this weekend.

Rosalie Bégin-Cyr and Emmy Fecteau are representing Canada in women’s hockey, while Tyler Hylland is with the men’s team.

The Canadian men's team will play the U.S. for gold Sunday at 5 p.m.

Both games take place at the Olympic Center is Lake Placid.

Canada’s women’s entry in the elite international competition, which started Jan. 11, went undefeated in five games and advanced to the semifinals. Canada defeated Slovakia 6-1 on Friday in the semifinals.

Fecteau, who is serving as Canada’s captain, had a goal and two assists for three points in the five preliminary games. Bégin-Cyr chipped in with two goals and three assists for five points, also in five games.

The preliminary results were as follows:

Hylland has been a strong contributor for the national student team. He has three goals and an assist for four points in five games.

The men’s preliminary results were as follows:

Canada had a bronze medal performance at 2019 Winter Games in Krasnoyarsk, Russia, and last won gold in 2013 in Trentino, Italy.

The 31st winter edition of the FISU World University Games wraps up this weekend. It is the largest international winter multi-sports event for student-athletes with more than 2,500 participants from more than 50 countries.