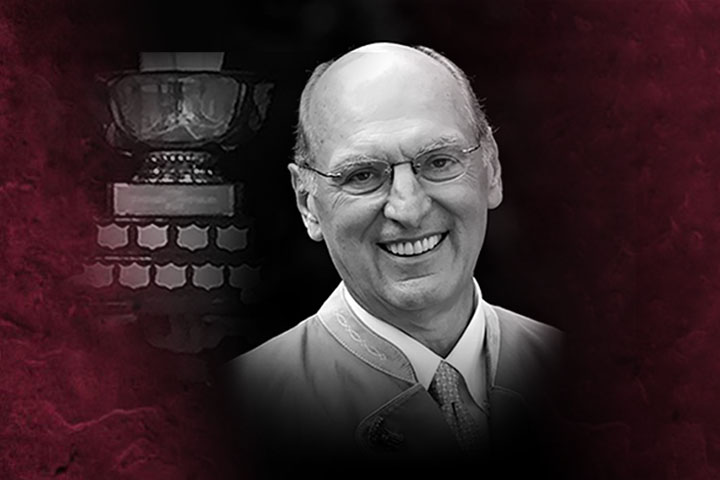 You couldn’t have scripted it any better. When the Concordia Stingers and McGill University men’s basketball teams meet this weekend, they will honour a university legend who represented both institutions, and he will be on hand for the biggest game of the regular season with first place in the RSEQ conference up for grabs.

The George Lengvari Cup, the epic clash between the two long-time rivals, is the Stingers’ eighth and final game in the prestigious Signature Series. It will take place at Concordia Gym on Saturday at 4 p.m. George Lengvari will do the ceremonial tipoff and award the Cup afterwards.

“We are fortunate to have George as a friend and supporter of our programs,” said Concordia head coach Rastko Popovic. “I hope the players from both teams take a hard look at what George has achieved and how he went about it. He clearly took advantage of his time at Loyola College and McGill, he worked hard and he became very successful.

“I’m pleased to be part of this great event, but mostly I’m excited that George will be spending time with the players, sharing his life experiences, and the history and stories from his days in uniform.”

With his leadership and prowess on the court, Lengvari was instrumental in energizing the Loyola sports scene in the early 1960s. A high scoring forward, he powered the 1962-63 Loyola Warriors men’s team to its first Ottawa-St. Lawrence (OSL) basketball title and a berth at the inaugural Canadian Intercollegiate Athletics Union championship. Lengvari was named the Warriors’ MVP in 1962-63, the last of his four seasons with the team.

He was also captain of Loyola varsity golf team and helped the team achieve its best-showing ever at the 1962 OSL Golf Tournament.

Lengvari was inducted into the Concordia Sports Hall of Fame in 2011.

Saturday’s game will be the final regular season meeting between Concordia and McGill. The Stingers currently sit in second place in the RSEQ standings with a 9-4 win-loss record and 18 points. Concordia has a game at hand on its crosstown rival who boasts a 10-4 record for 20 points. Each team plays 16 games in the regular season which wraps up Feb. 22.

The Stingers have won two of the three meetings this season.

Check out the results for the 2019-20 Signature Series brought to you by McKibbin’s Irish Pub.