Brigitte Laganière will be front and centre in the semifinal showdown. 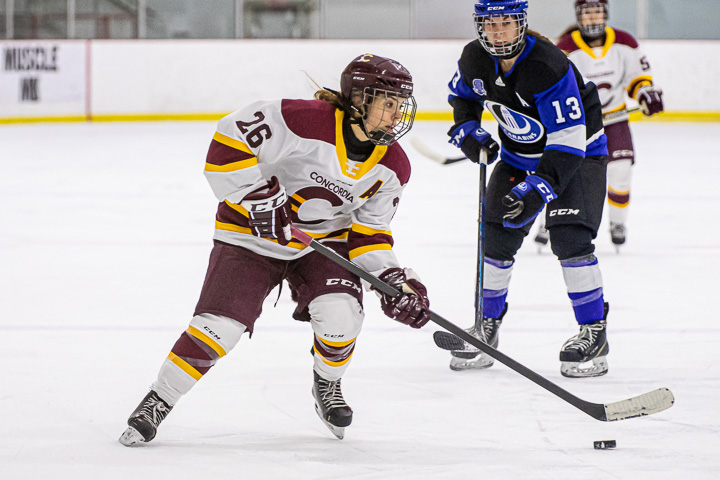 A heated women's hockey playoff battle between crosstown rivals gets underway Thursday night when the Concordia Stingers and the Montréal Carabins play Game 1 of a best-of-three RSEQ semifinal series.

The Stingers, who are the No. 1 team in the U Sports national rankings, will host the first game at 7:30 p.m. at the Ed Meagher Arena in N.D.G. Adding to the hype is a  Win Your Tuition  contest that’s open to Concordia Students who attend the showdown.

The best-of-three series moves to Montréal and the CEPSUM arena on Saturday at 2 p.m. Game 3, if necessary, is back at Concordia Sunday at 3 p.m.

The Carabins, who are ranked No. 9 by U Sports, finished in fourth place in the five-team RSEQ conference 23 points in 20 games. The Stingers were first with 32 points.

There were five regular season meetings between the teams. Concordia won four of the contests. All of the games were decided by one goal except a dominant 4-0 performance by the Stingers on Nov. 10.

Concordia outscored Montréal 15-9 in those games. Fifth-year captain Claudia Dubois and second-year forward Rosalie Bégin-Cyr did most of the damage with five and four goals, respectively.

This will be the sixth post-season rendezvous between the bitter rivals since Montréal came into the league in 2009-10. It is the first since 2018, when Concordia lost the RSEQ final opener 3-2 in overtime but roared back to win the series with 3-2 and 3-1 victories.