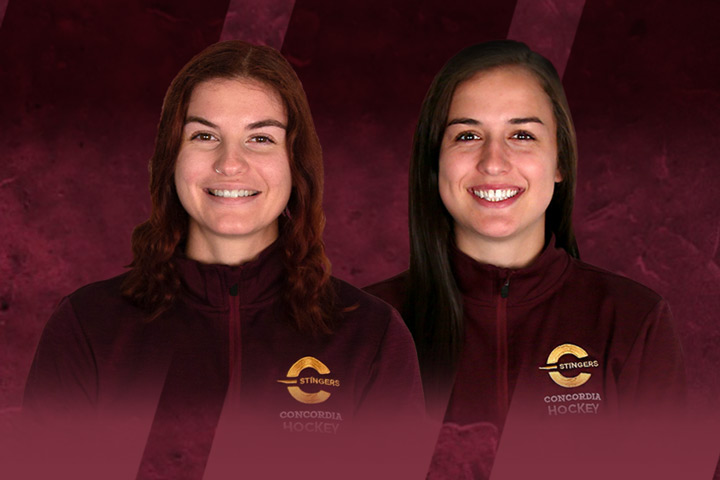 Five athletes from the Concordia Stingers women's hockey team were on the RSEQ all-star teams as tabulated by the conference recently.

Forwards Audrey Belzile, Claudia Dubois and Rosalie Bégin-Cyr made the honour roll. They are joined by defenders Brigitte Laganière and Alexandra Nikolidakis.

Belzile of St. Hyacinthe, Que. was named to the first all-star team. She played 20 games picking up seven goals and 15 assists for 22 points. She finished third in scoring in the RSEQ. This is the fourth conference honour for the fourth-year forward. She was also a first team honoree in 2019 and was named to the second team in 2018. In her first season, she was selected to the all-rookie team.

Bégin-Cyr of St. Georges, Que. was the leading scorer in U Sports with 1.4 points a game. She scored 15 goals and added 13 assists for 28 points in 20 games. She scored three power play goals and three game-winning goals for the Stingers. The second-year forward was also named the RSEQ’s MVP.

Laganière, a fourth-year athlete from Montreal, was a solid defensive presence and a significant contributor on offence with 18 assists in 20 games. This is her third conference honour. She was a second team all-star in 2019 and named to the RSEQ all-rookie team in 2017.

Nikolidakis, a fourth-year defender from Laval, Que., earns her first all-star recognition with a second team honour. She picked up seven assists in 20 games this year and earned respect for her play in her own end. She was also on the conference all-rookie team in 2017.

Rounding out the honours, forward Emmy Fecteau of St. Odilon, Que. was named the RSEQ Rookie of the Year and Julie Chu was the conference’s Coach of the Year.