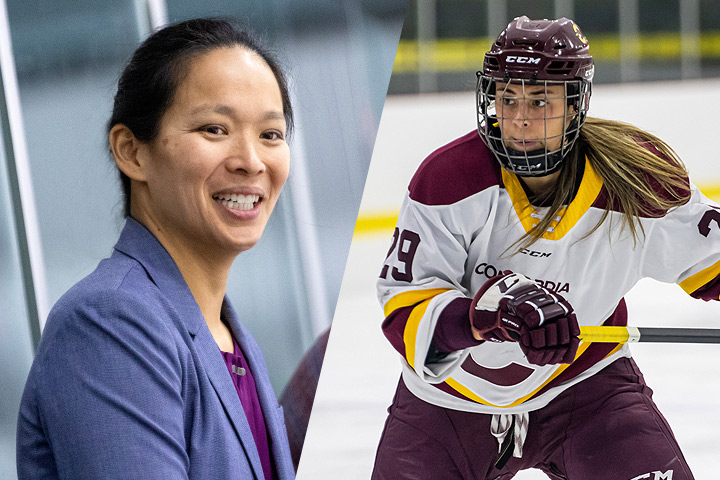 Chu, who took over the leadership of the Stingers’ program in June of 2016, was named the Coach of the Year. She led her team to a 15-3-2 win-loss-overtime loss record and first place in the conference.

Concordia had an 11-0 record in non-conference games, giving the team an impressive overall record of 26-3-2. The team also held the No. 1 spot in the U Sports rankings for 14 consecutive weeks in 2019-20.

This is the first time Concordia has posted 15 wins since the league went to a 20-game schedule in 2009-10. Previously, the RSEQ played a 15-game season. It is also the first regular season title for the Stingers since 2004-05.

“Julie is very deserving of this award,” said Concordia Director of Recreation and Athletics D’Arcy Ryan. “To say that she is dedicated to the program is an understatement. She is on top of every detail, every aspect of the team’s preparation on and off the ice. She has exceptionally high expectations and sets the standard with her own work ethic and commitment.

”This is Chu’s second time receiving the honour. She was also Coach of the Year in 2016-17.

Joining Chu on the honour roll are second-year forward Rosalie Bégin-Cyr who is the league MVP and forward Emmy Fecteau who was named the RSEQ Rookie of the Year.

Bégin-Cyr of St. Georges, Que. was the leading scorer in U Sports with 1.4 points a game. She scored 15 goals and added 13 assists for 28 points in 20 games. She scored three power play goals and three game-winning goals for the Stingers.

A graduate of the Limoilou Titans women’s hockey program, she continues to build remarkable résumé. She was the RSEQ Rookie of the Year in 2019.

“Rosalie is truly a complete player,” said Chu. “She plays a solid 200-foot game and is able to play in every situation for us. Defensively, we have the confidence to play her on the penalty kill and against top lines. Offensively, she is dangerous threat and she has the ability to score goals and set up teammates as well. Her vision and processing of the game are amongst the best I have seen.”

Fecteau of Saint-Odilon, Que. had a significant impact in her rookie campaign. She played all 20 games, collecting six goals and 11 assists for 17 points. She was the eighth best scorer in the conference and the highest scoring rookie.

She is also a graduate of the Limoilou’s very accomplished Cégep hockey program. She was a two-time conference all-star with the Titans.

“Emmy’s desire to compete and to get better every day allowed her to transition well to the university game and become a key player on our team,” said Chu. “She plays with a grit and enthusiasm that brings a positive energy to our team during practices and games. With her work ethic and eagerness to learn, she will only continue to grow and make an impact with our team in the future.”