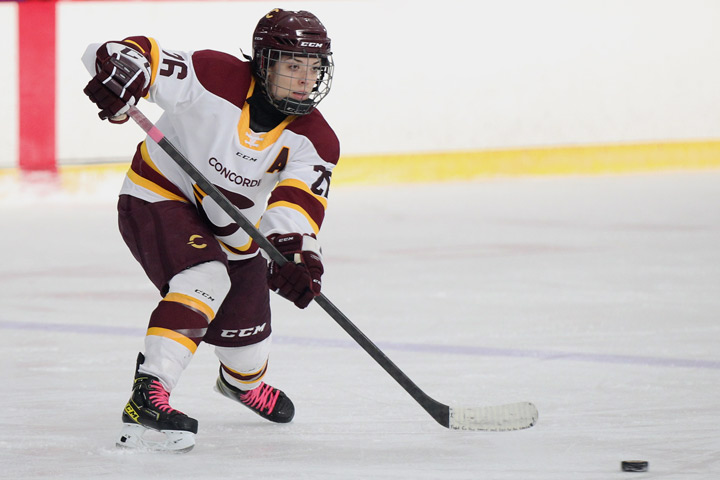 Three members of the Concordia Stingers women's hockey team were among the honorees as the major awards and all-star teams were celebrated at the U Sports annual all-Canadian gala in Charlottetown Wednesday night.

Second-year forward Rosalie Bégin-Cyr of St. Georges, Que. was named a first team all-Canadian. She was the RSEQ’s MVP and the leading scorer in U Sports with 1.4 points a game. She scored 15 goals and added 13 assists for 28 points in 20 games. She scored three power play goals and three game-winning goals for the Stingers.

The last time a member of the Concordia women’s hockey team was named a first team all-Canadian was in 2005 when defender Roxanne Dupuis was honoured.

Fourth-year defender Brigitte Laganière was named to the second all-Canadian team. The Montrealer was a solid defensive presence and a key contributor on offence with 18 assists in 20 games.

She is a two-time RSEQ all-star and was on the Quebec conference’s all-rookie team in 2017.

Fecteau of Saint-Odilon, Que. was named to U Sport’s all-rookie team. She had a significant impact in her first university season. The star forward played all 20 games, collecting six goals and 11 assists for 17 points. She was the eighth best scorer in the conference and the highest scoring rookie.

She is also a graduate of the Limoilou Titans' very accomplished Cégep hockey program. She was a two-time conference all-star with the Titans.