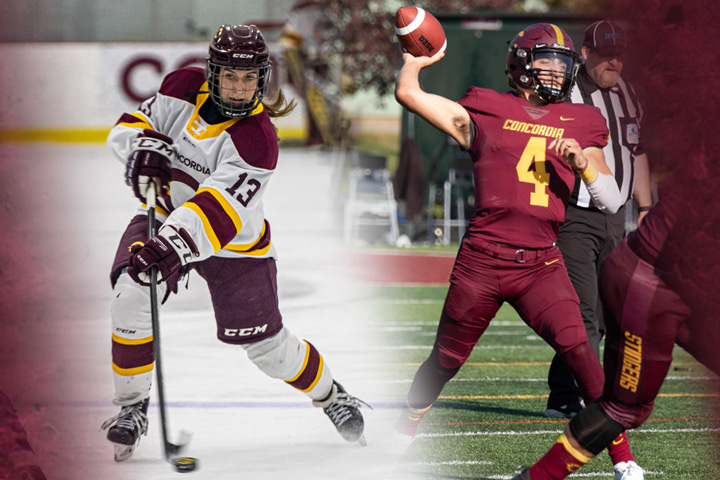 The Concordia Department of Recreation and Athletics is pleased to announce Rosalie Bégin-Cyr of the women’s hockey team and Adam Vance of the football team are the Stingers’ Athletes of the Year.

The department is announcing its major award recipients online this year. The 2020 Stingers Athletic Awards Gala was originally scheduled for April 2 before being cancelled because of COVID-19.

Beginning today and continuing through April 8, awards winners and season highlights will be shared on the stingers.ca website and on the Stingers’ social media accounts.

Bégin-Cyr is the recipient of the Sally Kemp Award as the Female Athlete of the Year. A second-year forward from St. Georges, Que., she was a first team U Sports all-Canadian, the RSEQ MVP and a Quebec conference all-star. She was also invited to Hockey Canada’s U22 Summer Camp.

Bégin-Cyr helped Concordia earn the No. 1-ranking in U Sports women’s hockey for 14 consecutive weeks. She contributed significantly to the Stingers’ posting a 15-3-2 RSEQ record and an 11-0 record in non-conference competition. She was also instrumental in helping Concordia win its first RSEQ regular season championship since 2004-05.

“Rosalie was dominant in all situations for us as she is a complete 200-foot player,” said women’s hockey head coach Julie Chu. “She is also a very balanced player for us in that she can set up teammates for goals and score goals herself. She is a big reason for our success this year.”

Vance is the recipient of the Dr. Robert J. Brodrick Award as the Male Athlete of the Year. A fifth-year quarterback who comes to Quebec from Visalia, Calif., he was awarded the Jeff Russel Trophy as the RSEQ football conference’s MVP last November. He was also named to the Quebec conference all-star team.

He finished the 2019 regular season on top of the RSEQ in several statistical categories. He completed 148 of 246 passes (60.2 percent) for 2014 yards and seven touchdowns.He had the most attempts, completions and touchdowns in the league. With 2014 passing yards, he was the only pivot in the RSEQ to break the 2000-yard mark.

The six-foot-two, 208-pound all-star helped Concordia establish the No. 1 passing offence and the No. 2 overall offence in the RSEQ. He also helped James Tyrrell, the top receiver in the conference, and rookie Jeremy Murphy earn all-star honours.

Vance played two years of junior football at Golden West College in Huntington Beach, Calif. before joining the Stingers in 2017. He wraps up his Canadian university football career with 313 completions on 538 attempts for 4355 yards and 15 touchdowns in three seasons.

“Adam demonstrated what an MVP is in 2019,” said Brad Collinson, head coach of the football team. “He bounced back from a tough season in 2018 to become the best quarterback in the RSEQ and one of the best in the country. He deserves a lot of credit for how he prepared, how he battled adversity and injuries, and still competed at a high level.”