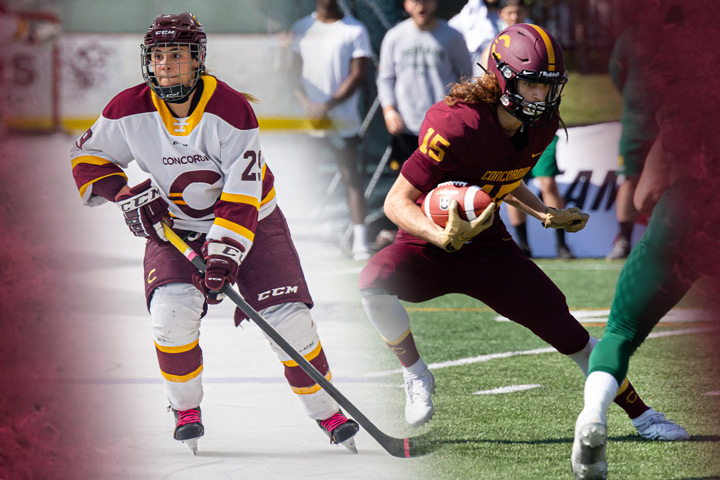 Rookie of the Year honours go to Fecteau, Murphy

The Concordia Department of Recreation and Athletics is pleased to announce forward Emmy Fecteau of the women's hockey team and receiver Jeremy Murphy of the football team have been named the Stingers' Rookies of the Year.

This year, the department is announcing its major award recipients online. The 2020 Stingers Athletic Awards Gala was originally scheduled for April 2 before being cancelled due to COVID-19.

She made a significant impact in her first university season. The star forward played all 20 games, collecting six goals and 11 assists for 17 points. She was the eighth best scorer in the conference and the highest scoring rookie. She led all first-year players in the country in points scored per game.

“Emmy transitioned really well from Cégep to university,” said Julie Chu, head coach of the Stingers’ women’s hockey team. “Her eagerness to learn and intensity to compete each day contributed to the tremendous growth she had over the season. She was always a strong offensive player; however, she also became a responsible defensive player. We could always count on consistent hard work from Emmy. It is a big reason for her success on the ice and the success of our team as well.”

Fecteau of Saint-Odilon, Que. is a graduate of the Limoilou Titans Cégep hockey program.

Murphy is the 2020 recipient of the Concordia Male Rookie of the Year Award. He earned multiple honours in his tremendous freshman season, including being awarded the Peter Gorman Trophy as the outstanding rookie in Canadian university football. He was the Quebec conference Rookie of the Year and its Rookie of the Year on Offence. He was also an RSEQ all-star.

Last fall, the resident of St. Bruno de Montarville, Que. quickly became a major part of the Stingers’ offence. Murphy caught 34 passes for 491 yards and four touchdowns. He led the RSEQ in receiving touchdowns, he was third in yards and fourth in receptions.

“Jeremy showed up to camp in 2019 as a bit of an unknown,” said Brad Collinson, head coach of the Concordia football team. “He quickly started to turn the heads of the coaches and then quickly put the league on notice. He played at an unusually high level all year for a freshman. He was game-planned against and still performed at a high level.”