Caroline Ouellette (right) will replace Julie Chu for one year. 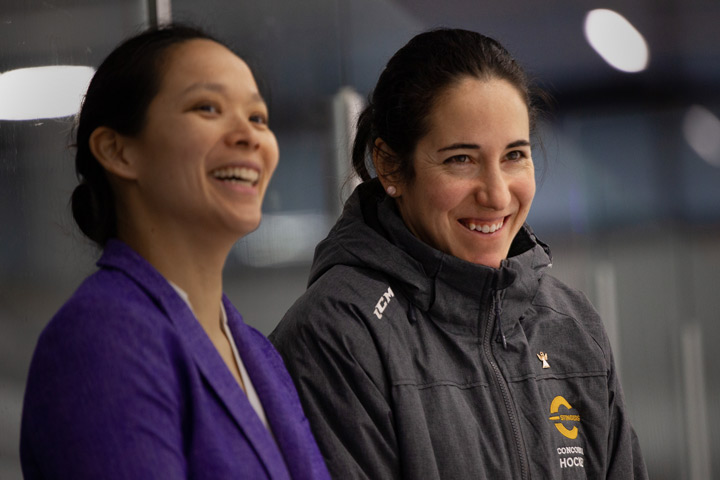 Concordia University Director of Recreation and Athletics D'Arcy Ryan is pleased to announce Caroline Ouellette has been named the interim head coach of the Stingers women's hockey team.

Effective immediately, Ouellette is stepping in for Julie Chu who is on maternity leave after giving birth to a baby girl in May.

“Our program is one of the top in the country and I know Caroline will keep its high standards and help move the team forward,” said Ryan.

“She has been involved with the Stingers as an assistant coach for many years and has been instrumental in helping develop the foundation and philosophies that have led to its success in recent years.”

She made her debut with Team Canada in 1998 and officially retired in 2018. She scored 26 points in Olympic competition – nine goals and 17 assists in 20 games played. A forward, she retired as the third-highest scorer in national team history with 242 points (87 goals, 155 assists) in 220 games.

The next chapter in her storied hockey career focuses on coaching the Stingers.

“I love working with this team and I’ve been doing it many years now,” Ouellette said. “I’ve loved every minute of it. It’s a great family and there’s a great staff that really cares. It is a pleasure for me to devote myself full-time in a coaching role.”

Ouellette brings a wealth of coaching experience with her. In addition to being an assistant at Concordia, she was associate head coach of Les Canadiennes for two seasons and with the Professional Women’s Hockey Players Association (PWHPA-Montreal) last season. She has worked with national team programs and was part of the coaching staff when Canada won silver medals at the IIHF women’s championships in 2017 and 2019.

She was also an assistant coach at the University of Minnesota Duluth when its women’s hockey team won the NCAA championship in 2008. She has been involved with countless youth programs and hockey schools.

In recognition of her success and leadership, Concordia awarded Ouellette an honorary doctorate in 2019.

Taking over a high level program in the midst of COVID-19 and all the uncertainty it brings will present new challenges, but Ouellette is ready.

“What matters the most is controlling what we can,” she said. “When we can resume play, we will be ready and will come out flying.”

To that end, the players and staff have been meeting regularly on Zoom, working hard on fitness and training from their homes and even held a virtual banquet to honour last year’s graduating seniors.

The RSEQ conference has not made any decisions on its sports seasons for 2020-21. The women’s hockey program and all Stinger teams continue to train in hopes of receiving good news in the coming months.