The accomplished coach and former Olympian is excited to continue with the Stingers. 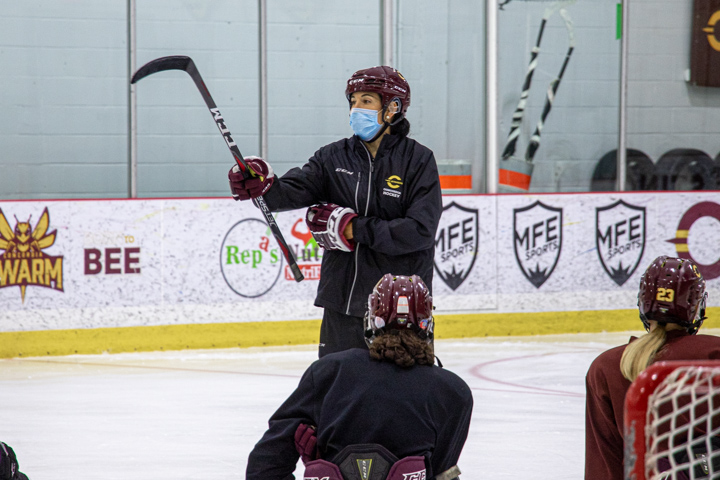 Director of Recreation and Athletics D'Arcy Ryan is pleased to announce the department has added a second full-time coaching position to its women's hockey program, and the role of associate head coach will be filled by Canadian and Olympic hockey legend Caroline Ouellette.

“We have a long tradition of excellence in our women’s hockey program and we felt strongly that it was time to commit more resources to it,” he said. “Caroline’s accomplishments, leadership and experience with our program make her uniquely qualified to move into this new role.

“With Caroline adding her expertise to that of head coach Julie Chu, there’s no doubt we will continue to attract the best student-athletes and provide them a tremendous university hockey experience.”

Ouellette was the interim head coach of the Stingers women’s hockey team in 2020-21 while Chu was on maternity leave. She guided the team through the difficult COVID-19 season, working hard to keep the players engaged, and focused on their conditioning and academics.

She also served as an assistant coach for several years with former head coach Les Lawton and then with Chu. In fact, Ouellette says Lawton’s support for the new position was instrumental in making it happen.

“I am really thankful to have this full-time position with the Concordia Stingers women’s hockey team,” she said. “I love this team and our staff, and I am so excited about the opportunity to continue working with our committed, talented and passionate student-athletes.”

Previously, Ouellette was associate head coach of Les Canadiennes for two seasons and with the Professional Women’s Hockey Players Association (PWHPA-Montreal). She has worked with national team programs and was part of the coaching staff when Canada won the IIHF women’s championship in 2019. She was also an assistant coach at the University of Minnesota Duluth when its women’s hockey team won the NCAA championship in 2008. She has been involved with countless youth programs and hockey schools.

Ouellette was recently named head coach of Team Quebec and will compete at the National Women’s Under-18 Championship in November.

Of course her accomplishments as a forward representing Canada in international competitions are well-documented. Ouellette was a member of the national women’s hockey team for 20 years, winning four gold medals at the Winter Olympics and six gold medals at the International Ice Hockey Federation (IIHF) world championships.

She made her debut with Team Canada in 1998 and officially retired in 2018. She stepped away as the third-highest scorer in national team history with 242 points (87 goals, 155 assists) in 220 games.