Barry Lorenzetti addresses the Stingers before their victory over McGill last Friday. 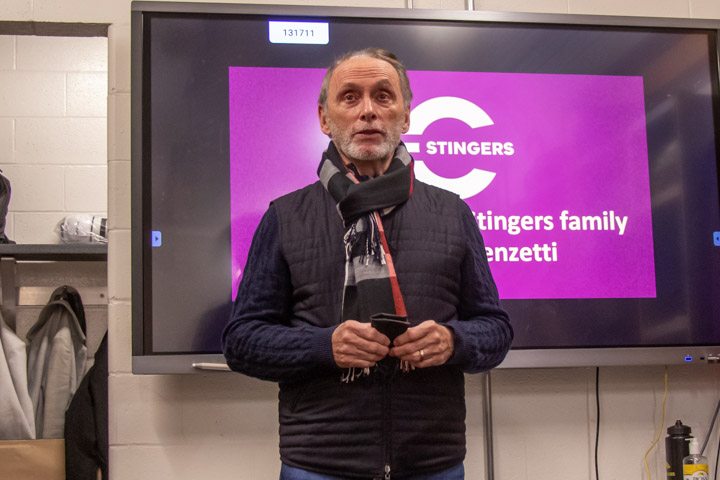 Giving Tuesday is still more than a week away, but the Concordia Stingers women's hockey program received a major boost when Montreal businessman and philanthropist Barry Lorenzetti presented the team a cheque for $10,000.

The donation by the Founder of BFL Canada was announced before the Stingers’ 5-2 victory over the McGill Martlets at the Ed Meagher Arena last Friday. Lorenzetti was on hand to present the cheque and to drop the puck at the start of the game. Associate head coach Caroline Ouellette and captain Audrey Belzile accepted on behalf of the team.

Lorenzetti is the President, CEO and Founder of BFL CANADA, a Canadian powerhouse in the field of insurance. He is heavily involved in community service and supporting charitable organizations. For several years, and in keeping with his lifelong love of hockey, he has also been involved with Hockey Canada and sits on the Board of the Hockey Canada Foundation.

He is also a strong advocate for equity, diversity and inclusion in business. He recently made a significant donation to Concordia University to support the first ever Centre for Women Entrepreneurship and Leadership at the John Molson School of Business.

The generous gift to women’s hockey is greatly appreciated and will help head coach Julie Chu address some program needs. She would like provide mental skills training that will benefit the Stingers both on and off the ice and hire additional support staff to enhance player performance and give the team a competitive edge.

You can help the women’s hockey program with its goals this Giving Tuesday. The team’s fundraising web page is now accepting donations. You can find it HERE