Concordia president Graham Carr (right) and George Lengvari are joined by the Stingers. 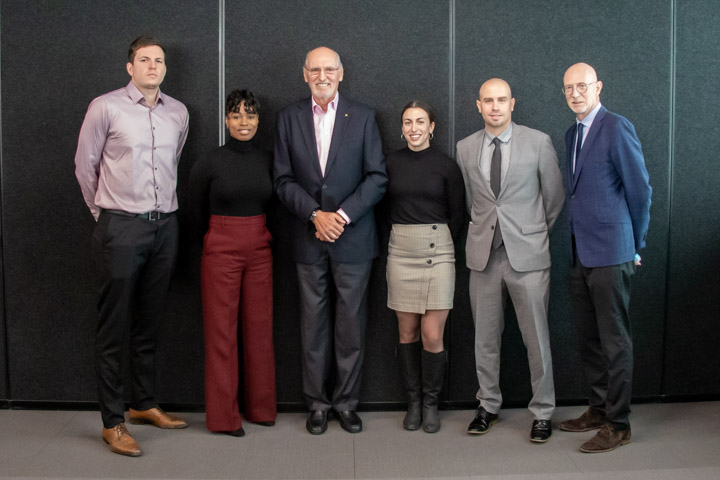 Former Loyola College star George Lengvari has generously donated $1 million to the Concordia Stingers basketball programs, marking the first time in the history of the university that the athletics department has received a gift of that size.

The donation was revealed Tuesday morning on Concordia’s downtown campus as part of an event announcing the successful businessman is supporting the basketball programs at both Concordia and McGill University with a $1 million gift to each school.

It is believed to be the first time in the history of Canadian university sports philanthropy that an alumnus has made a simultaneous million-dollar gift to two alma maters.

His gift will support student-athletes through annual awards and the enhancement of coaching, training, recruitment and other activities.

“I’m not paying it forward, I’m paying it back,” Lengvari told the attendees. “I’m paying back all the people that helped me along the way.”

Lengvari, whose Hungarian family immigrated to Canada when he was nine years old, obtained his bachelor’s degree in economics in 1963 from Loyola, one of Concordia’s founding institutions. He later enrolled in the Faculty of Law at McGill and completed a civil law degree in 1966.

At McGill, Lengvari played basketball for three seasons and served as team captain. He has since volunteered his time as a mentor to players and coaches at both schools.

“I was very fortunate to have the support I needed to play basketball and advance my education at the same time,” said Lengvari. “I can say with confidence that I would not be where I am today without that opportunity. Sports is a critical part of the university experience — it fosters people and leadership skills, while creating a wonderful sense of community. I want to pass this on to the student-athletes of tomorrow at Concordia and McGill.”

Lengvari was a recipient of the U SPORTS inaugural Mitchell Family Alumni of the Year Awards, celebrating former varsity athletes who have become leaders in their community and recognizing the continued contributions to their alma mater.

At the event on Tuesday, the Concordia and McGill basketball teams announced they would work together to offer free basketball clinics to local youth, as a tribute to Lengvari.

“George has taught us a lot,” said Stingers head coach Rastko Popovic. “One of the biggest lessons is that the best way to be successful is to help other people be successful. There are many ways we can give back to the community and we’re just beginning.”