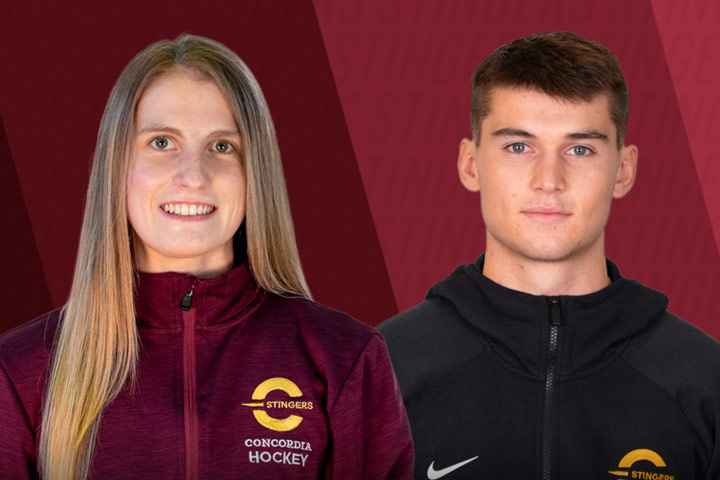 Philbert, Phaneuf - Athletes of the Week

Alice Philbert of the women's hockey team and Alec Phaneuf of the men's basketball team have been named the Subway-Concordia Stingers athletes of the week for the period ending March 6, 2022.

Philbert, a fourth-year goaltender, was spectacular in two playoff victories last week. She recorded a shutout in Game 1 of the best-of-three semifinal series with the Montréal Carabins last Thursday. She turned away 21 shots in the 3-0 win. Two days later in Game 2, she stopped 16 of 17 shots to help the Stingers win the game 2-1 and wrap up the series.

A 25-year-old resident of St. Bruno de Montarville, Que., Philbert is working on a Graduate Diploma in Business Administration.

Phaneuf, a rookie guard, had two impressive performances last week. In a 74-51 victory over the UQAM Citadins last Thursday, he scored a career-high 27 points in just 28 minutes of playing time. Two days later, the Citadins won the rematch 67-59, but Phaneuf was in double digits again, with 13 points and he added three assists.

The 20-year-old student-athlete from Gatineau, Que. is studying Sociology.