Malick Sylvain and Brigitte Laganière with Inez and George Lengvari at the ceremony. 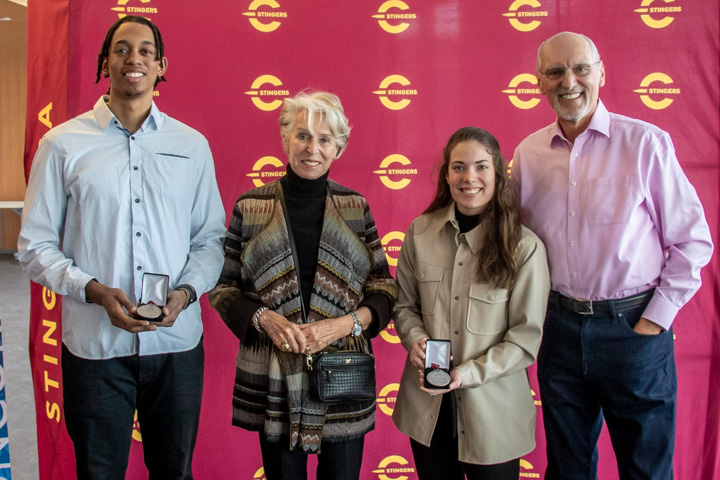 The inaugural Joe and Ben Weider Athletic Leadership Awards were presented to Concordia Stingers Brigitte Laganière and Malick Sylvain at a ceremony on the university campus today.

The awards recognize one male and one female student-athlete who have excelled in their sports, their academics and demonstrated leadership through community involvement.

Laganière, a graduating senior from Anjou, Que., plays defence for the women’s hockey team. She just received her third straight all-star honour. She played all 15 games for the Stingers and finished fifth in league scoring with three goals and 14 assists for 17 points. The assistant captain was the top scoring defender in the conference.

Laganière was a 2020-21 academic all-Canadian and is currently working on a Graduate Diploma in Business Administration.

Sylvain has been with the Stingers football team since 2018. A tremendous athlete, he has been the team’s utility player. He started out as a receiver and has also suited up at defensive back and defensive end where he has played in 2021. He’s dressed for all the games and provided leadership on the young unit. His athleticism and his willingness to sacrifice for the good of the team earn him a lot of respect.

The La Prairie, Que. resident studies Religion and Cultures and maintained a GPA over 3.35 last year. For more than two years, Sylvain has been volunteering at the Jamaica Association of Montreal with members of his football team. The organization is dedicated to assisting in improving and enhancing the quality of life for the Jamaican community. The Stingers help with the association’s food bank, unloading trucks and stocking shelves.

He also supports the Shoebox Project for Women, an organization that collects and distributes gift-filled shoeboxes to local women impacted by homelessness. Each Shoebox is filled with items valued at approximately $50 that can enhance confidence and reduce feelings of isolation.

Inspired to give more, Sylvain works with a friend to design and sell T-shirts and hoodies “in the context of the Black Lives Matter movement” and donates proceeds from the project to the Jamaica Association of Montreal and the Shoebox Project.

The Weider awards have been established with a $320,000 gift from George Lengvari, a former Loyola College basketball star and Concordia Sports Hall of Famer, with additional support from the Weider Foundation and Terry Tretiak, president of Lengvari Capital. They will be presented annually.

The honours presented to Laganière and Sylvain came with an engraved medal and financial support of up to $5,250 for tuition expenses.

Joe and Ben Weider were Montreal-born brothers from humble beginnings who built a world-renowned empire on the success of their bodybuilding, fitness and publishing initiatives.

Lengvari, who served as a senior vice-president and vice-chairman at Weider Health and Fitness from 1994 to 2009, initiated the awards to honour the Weiders who “were great friends, mentors and benefactors."

“I wouldn’t be here today if I didn’t have the opportunity to work with them,” said Lengvari. “These awards in their honour are about creating a legacy. This is my thanks to Concordia. I’m not paying it forward — I’m paying it back.”