George Lengvari joins Concordia and McGill for tipoff at the annual rivalry game. 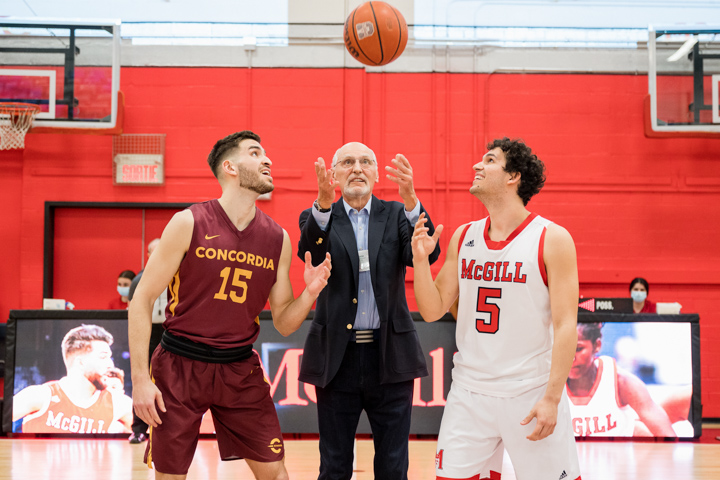 Redbirds eke out victory over Stingers in Lengvari Cup

McGill senior Quarry Whyne made a pair of free throws with 2.8 seconds left in the game to give the Redbirds a 58-57 win over the Stingers. McGill rallied from an 18-point deficit to keep its unblemished record intact.

Concordia led 28-21 at the half and stretched the lead to 48-30 with just under two minutes remaining in the third quarter. McGill went on a 29-8 run in the last 12 minutes of the match.

Lengvari, whose Hungarian family immigrated to Canada when he was nine years old, obtained his bachelor’s degree in Economics in 1963 from Loyola College, one of Concordia’s founding institutions.

He later enrolled in the Faculty of Law at McGill and completed a civil law degree in 1966.

At McGill, Lengvari played basketball for three seasons and served as team captain.

The successful businessman supports the basketball programs at both Concordia and McGill and made a $1 million gift to each school last December.