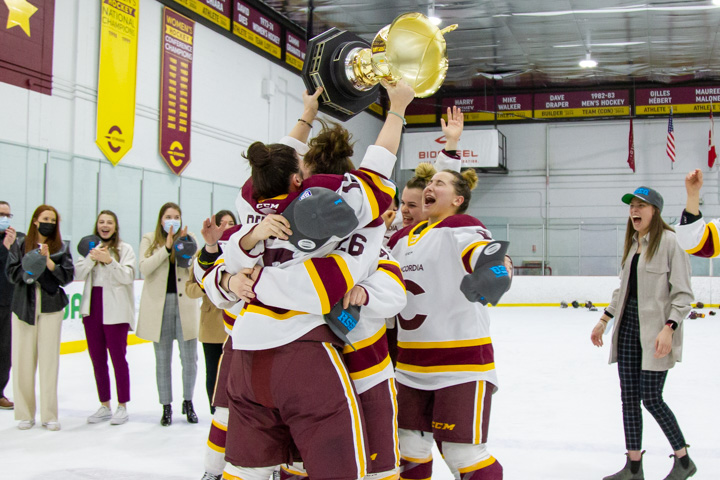 The Concordia Stingers locked up the RSEQ women's hockey championship series with a 4-1 victory over the McGill Martlets before 632 boisterous fans at the Ed Meagher Arena on Friday night.

“I’m so excited for the team,” said head coach Julie Chu during the post-game celebrations on the ice. “It’s been a journey. I think for every team that’s part of U Sports, it’s been tough. It’s been hard. We have a resilient group and for us to finish on this note and to then build into nationals, we are really excited. We’ll enjoy this tonight and then refocus. Our season is not done.”

It’s the first time the Stingers have won the title on home ice since 2005 and only the second Quebec championship in the last 17 years. Under Chu’s direction, Concordia won the 2017-18 banner and went on to win a bronze medal at the U Sports national championship.

The Stingers were able to build a good early lead on two unanswered first period goals from Rosalie Bégin-Cyr and Audrey-Anne Rodrigue who scored a short-handed marker.

The teams exchanged goals in the second period with McGill’s Christiana Colizza scoring on the power play at 7:26 and Concordia’s Stephanie Lalancette answering in the dying seconds.

The only scoring of the final frame was an empty-net goal from Concordia captain Audrey Belzile.

Alice Philbert stopped 34 of 35 shots for the Stingers, while Martlet goaltender Trisha Deguire gave up three goals on 35 shots.

Both teams have earned berths at the national championships March 24-27 in Charlottetown, PEI. As champions Concordia will be ranked higher when the seedings are announced by U Sports on Sunday.