Head coach Julie Chu has put together one of the strongest lineups in recent history. 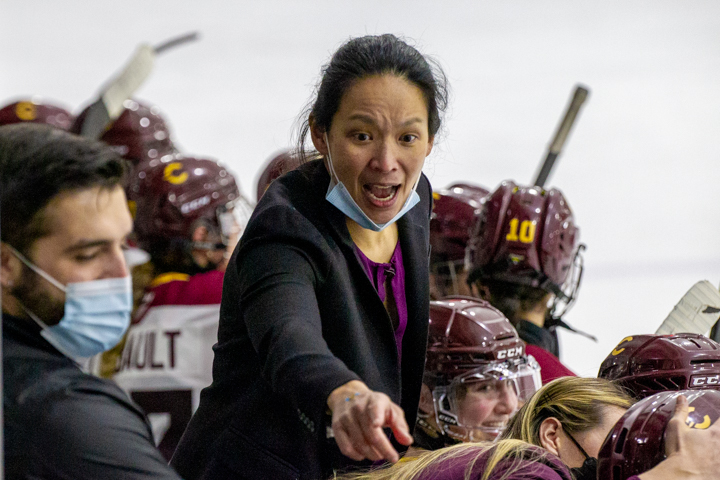 There were so many key pieces in place for the Concordia Stingers women's hockey program at the start of the 2021-22 season that expectations were exceptionally high.

Head coach Julie Chu masterfully built a skilled, deep and experienced team. There were eight seniors on the team, including four who stayed with the program during the COVID-19 pandemic shutdown and returned for a sixth season (5th year of eligibility). As well, 2019-20 RSEQ MVP Rosalie Bégin-Cyr was back in the fold.

Recruiting had gone exceptionally well during the pandemic and some of the top young talent in the province had joined the team. Forwards Émilie Lavoie, who is on the national team’s radar, and Chloé Gendreau, the 2020 RSEQ college MVP, were now with the Maroon and Gold

Olympian Caroline Ouellette had joined the team as the full-time associate head coach.

On paper, the team looked invincible. But then the Stingers lost two games at their own tournament in October, and they were bested in the first two RSEQ regular season contests. Concordia wasn’t even in the U Sports Top 10 the first couple of weeks the rankings came out.

“It didn’t come easy for us in the fall,” Chu admits. “After being off for a year and a half, we weren’t as connected. Not seeing each other, not having meals together, it was hard. We had to take time to build our culture and get back to the relationships we had before.”

In November the tied turned, the wins started to come and Concordia began to work its way up in the rankings. Now on the eve of their opening game at the U Sports national championships in Charlottetown, P.E.I, the Stingers are riding a 10-game winning streak that includes a two-game sweep of the McGill Martlets in the conference championship series and they are the No. 1 seed at the tournament.

Concordia meets the host PEI Panthers (No. 8 seed) in a quarter-final matchup Friday at 6 p.m. (EDT). The Panthers finished fourth in the AUS’s eight-team conference with a 13-7-2 record. They were eliminated in the quarter-finals by the St. Thomas Tommies, but as the host team UPEI has a berth in the championship.

Guaranteed the Stingers have done their homework, watched film and analyzed the scouting reports. But playing exclusively in their own conference in 2021-22 was unusual.

“We’ve had a bit more crossover with teams outside Quebec in the past,” Chu said. “We’ve been able to get to know the teams and strengths in other conferences. This year, there’s more unknowns.

“We’re going to have to be prepared to make adjustments and to react to what we see even more than usual.”

At the end of the day, there are a lot of pieces in place to help the Stingers have success at the national tournament, but the team has to stay true to itself.

“I think it’s important for us to stay in the moment,” said Chu. “We have to be aware of where our feet are. It’s easy to start looking forward, but we have to finish up and focus on our game.”