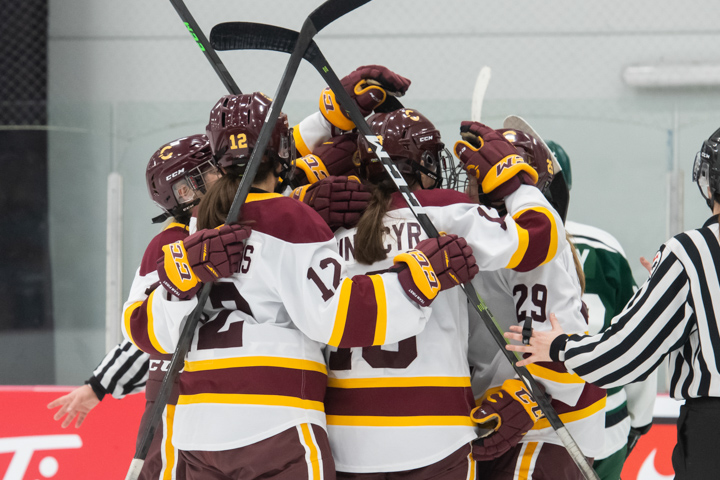 Rosalie Bégin Cyr scored a hat trick to lead the No. 1-seeded Concordia Stingers to a 7-0 victory over the host UPEI Panthers in their opening game of the 2022 U Sports women's hockey national championship in Charlottetown, P.E.I. before a packed crowd at the Bell Aliant Centre on Friday night.

The Stingers advance to the national semifinals and will meet the No. 5-seeded Saskatchewan Huskies on Saturday at 6 p.m. (EDT).

“It was a good victory,” said Bégin-Cyr, the Player of the Game, afterwards. “We were well prepared. All week we’ve had one goal and that was to beat UPEI. We knew the crowd would be on the other side. We didn’t let it distract us and we focused on the game.”

Bégin-Cyr notched the first goal of the game on a power play at 13:46 of the first period, and the score remained 1-0 for the rest of the stanza.

Concordia collected two goals in the second period to claim a 3-0 lead after 40 minutes. All-Canadian defender Brigitte Laganière picked up the Stingers’ second power play of the night at 14:37 and forward Stéphanie Lalancette, also an all-Canadian, scored just over a minute later.

In the final period, Begin-Cyr scored two goals to complete her hat trick. Maria Manarolis and captain Audrey Belzile also chipped in to make the final score 7-0. Stinger goaltender Alice Philbert turned away 14 shots to record the shutout. She has blanked the opposition three times in five playoff games this year.

Concordia had 32 shots in the game.

Saskatchewan finished fifth in the nine-team Canada West conference. The Huskies had an 11-7-2 record but went on an impressive playoff run. They won two series before being shut down in two straight games by the UBC Thunderbirds in their conference final.

On Friday, they beat the Ontario champion Brock Badgers 4-0 in quarter-final action.