Stéphanie Lalancette and Olivier Simon wrapped up brilliant careers on the weekend. 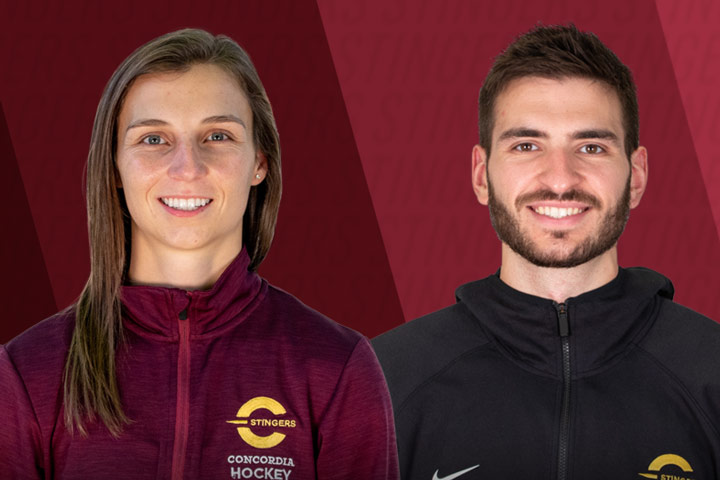 Lalancette, Simon - Athletes of the Week

Stéphanie Lalancette of the women's hockey team and Olivier Simon of the men’s basketball team have been named the Subway-Concordia Stingers athletes of the week for the period ending March 27, 2022.

Lalancette, the veteran right wing, was named MVP of the U Sports women's hockey championship in Charlottetown, P.E.I. after helping her team win a gold medal with a 4-0 victory over the Nipissing Lakers on Sunday night.

She scored two goals in the gold medal game. She was named the Player of the Game and was also named to the tournament all-star team. She completed the nationals with two goals and three assists for five points in three games.

Lalancette was also named the RSEQ Female Athlete of the Week.

A 25-year-old resident of St. Félicien, Que., Lalancette is enrolled in the graduate certificate in Business Administration program at Concordia.

Simon, a graduating senior, gave it everything he had in the last two games of his career. Despite being banged up, he played 25 minutes and picked up nine points and eight rebounds to help the Stingers defeat the Bishop’s Gaiters 76-42 in a RSEQ semifinal game last Wednesday.

Three nights later in the provincial championship, the Stingers were edged out 48-46 by the McGill Redbirds, and Simon finished his outstanding career with a double-double - 14 points and 10 rebounds.

The 25-year-old student from Terrebonne, Que. is working on a graduate diploma in Business Administration.