Stéphanie Lalancette and Olivier Roy made headlines in Quebec and across Canada. 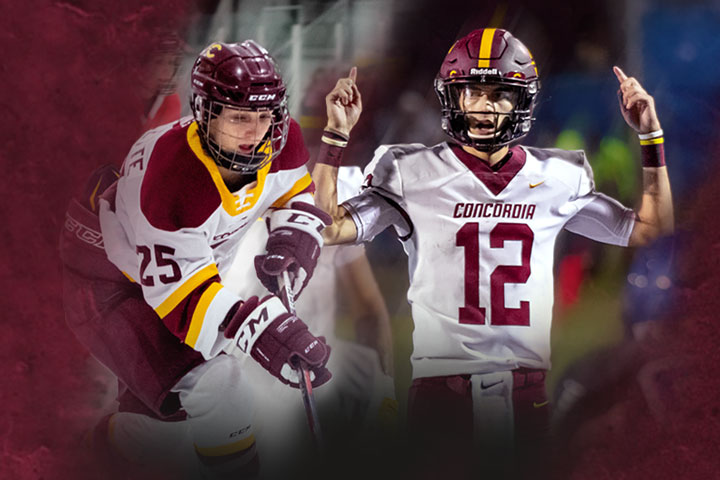 The Concordia Department of Recreation and Athletics is pleased to announce Stéphanie Lalancette of the women's hockey team and Olivier Roy of the football team are the Stingers' Athletes of the Year.

Lalancette is the recipient of the Sally Kemp Award as the Female Athlete of the Year. A senior forward from St. Félicien, Que., she was a second team U Sports all-Canadian, a RSEQ all-star and she was named the MVP at the national championship last March for her role in helping the Stingers win the gold medal.

She was the leading scorer on the Stingers with seven goals and 14 assists for 21 points in 15 games. She ranked third in conference scoring.

The talented right winger was one of five Stingers selected to represent Canada at the Winter Universiade scheduled for last December in Lucerne, Switzerland.

“Stéphanie had a tremendous season from start to finish,” said head coach Julie Chu. “She played a key role in all situations for our team. She utilized her speed well to create offensive chances, while also being able to take away time and space defensively. Her commitment to preparation allowed her to be ready to compete each night and to maintain that through a long season. This was by far the best season of her career.”

Roy is the recipient of the Dr. Robert J. Brodrick Award as the Male Athlete of the Year. A third-year quarterback who comes to Concordia from Donnacona, Que., he was awarded the Jeff Russel Trophy as the RSEQ’s MVP last November. He was also named a second team U Sports all-Canadian and a Quebec conference all-star.

He finished the regular season on top of the RSEQ in several statistical categories. In eight games, Roy completed 163 of 265 passes (61.5 per cent) for 2470 yards and 18 touchdowns. He had the most attempts, completions, yards and touchdowns in the league.

Roy was also the fourth-leading rusher in the RSEQ with 45 carries for 318 yards and two touchdowns.

“Olivier’s body of work and achievements this year are remarkable,” said Concordia head coach Brad Collinson. “He leads the RSEQ and U SPORTS in multiple categories. There’s no doubt he’s a true MVP. He carries the team on his shoulders. He takes all the pressure and plays at a level I’ve rarely seen.”