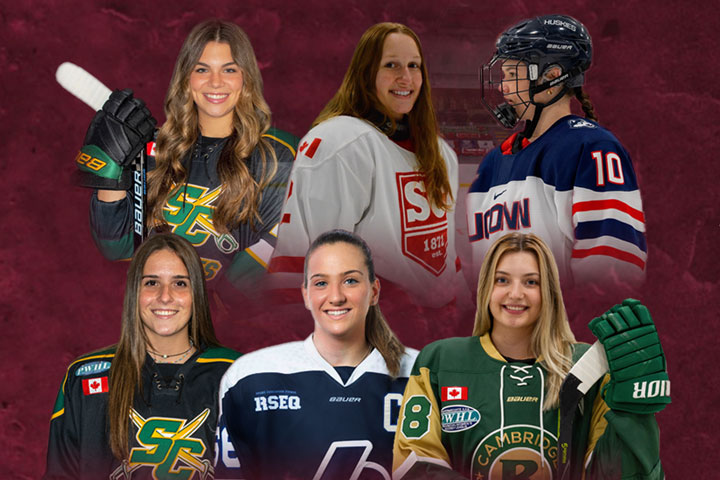 Meet the newest members of the Stingers women's hockey team

“We have good, hard working young players coming in,” said Chu. “There’s a lot of talent in the group. These players have a great drive and eagerness to grow and get better.”

Joining the defending national champions are:

Coach Chu’s Comments: Brodi is a tenacious forward whose forecheck and competitive nature puts opponents on their heels. She creates a lot of offensive turnovers and generates many opportunities for herself and teammates with her relentless pressure.

Coach Chu’s Comments: Courtney has a great offensive touch. She can outside drive the opposing team, beat opponents 1-on-1 or find teammates on the rush. She has a mature demeanor and played an important leadership role for her team this year.

Coach Chu’s Comments: Kristina battles and competes all over the ice. Her relentless work ethic allows her to create turnovers and generate offensive opportunities from there. She is a strong character person, who will add positively to our team-first environment.

Coach Chu’s Comments: Alex is a dynamic and mobile defender. Her skating ability allows her to play solid defensively and join the offensive attacks. She has a great poise with the puck, which will be an asset for us. With previous university hockey experience, we look forward to her bringing a lot of experience to our defensive core.

Coach Chu’s Comments: Rachael has a fun and outgoing personality and will bring great energy to our team. On the ice, she is a great skater and has the ability to transition the puck to offence really well.

Coach Chu’s Comments: Camille has incredible defensive positioning, which allows her to shut down opponents on the rush and in zone. She has an awesome attitude with a mindset of continued growth. She will fit perfectly in our team culture and be a solid shutdown defender for our team.