Emmy Fecteau (left) and Émilie Lavoie are heading to Calgary for the selection camps. 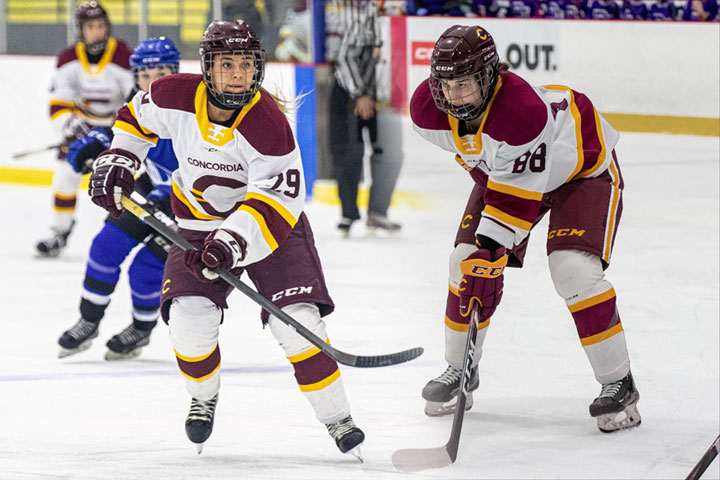 Stingers associate head coach Caroline Ouellette joins the national senior team as an assistant coach, and Andrew Davis will serve as an equipment manager at camp.

The 11-day camp will bring together 142 top athletes who will compete for spots on Canada’s national women’s team, the development team and the under-18 team.

It is not the first time Fecteau, a third-year centre from St. Odilon, Que., has been invited to work with the national program. In August of 2019, she was selected by the development team for a three-game series against the United States in Lake Placid, N.Y. In 2021, she was one of 40 players invited to the development team’s summer camp.

Left wing Lavoie of Beloeil, Que. was the 2022 RSEQ Rookie of the Year and named to the U Sports all-rookie team. She was also invited to participate in the development camp in the summer of 2021.

Lussier was a RSEQ Cégep all-star last season. The talented forward from Ste. Martine, Que. was the second leading scorer at the college level with 29 goals and 19 assists for 48 points in 23 games. She played for Team Quebec at the 2019 Canada Winter Games.

Ouellette will stay with Canada’s national women’s team in preparation for the 2022 IIHF Women’s World Championship, which begins Aug. 24 in Herning and Frederikshavn, Denmark.