Olivia Hale is will serve as captain and lead the Stingers into the 2022-23 season. 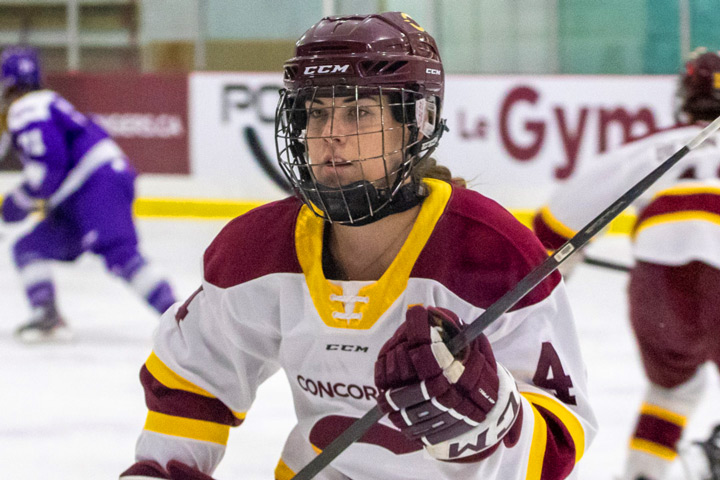 This Sunday, the Concordia Stingers women's hockey team turns the page on an incredible chapter in its long, storied history.

At the start of its home-opener versus the Bishop’s Gaiters, the 2022 national championship team will be honoured and the U Sports banner will be raised.

But when the puck drops a few minutes later, the focus shifts to the current edition of the Stingers. And the new season brings with it new leadership. Veteran defender Olivia Hale will serve as team captain.

“It’s a privilege to have the C on your sweater and to know that your teammates think you can handle the pressure and the responsibility,” she said.

“I think the job is to make sure everyone is on the same page in all aspects on and off the ice. You have to have relationships with everyone. You need to be aware of what the feeling is around the room, and you have to communicate with everyone.”

“We are very excited for our leadership group,” said head coach Julie Chu. “They are a balanced group with each person bringing a unique and great perspective to our leadership. We are still early in our season, but already I have been impressed by the ownership our leaders have taken in setting the direction of our team, guiding the way and providing valuable suggestions and feedback for the coaches.”

Players to watch this season include:

Rosalie Bégin-Cyr is a fourth-year forward who is a very good play maker and is used in every situation for the Stingers. She had five goals and 11 assists for 16 points in 15 games last season.

Emmy Fecteau is a third-year star who made the Canadian national women’s development team this summer. She is a very skilled and dynamic forward who plays with intensity and grit. She scored six goals and nine assists for 15 points in 15 games in 2022.

Jessymaude Drapeau is a second-year forward who is one of the most improved players on the team. She is a true sniper with a great shot. She had five goals and seven assists for 12 points in 15 regular season games. She also scored some important goals in the playoffs.

Centre Émilie Lavoie was the RSEQ Rookie of the Year in 2022. She can net goals and set up teammates. She scored eight goals and added eight assists for 16 points last year.

Goaltender Alice Philbert will also be a key to Concordia’s success in 2022-23. She finished last season with seven shutouts in 10 games. She did not give up a goal at the nationals and was named to the championship all-star team. She is in her last season with the Stingers.

Tickets can be purchased HERE