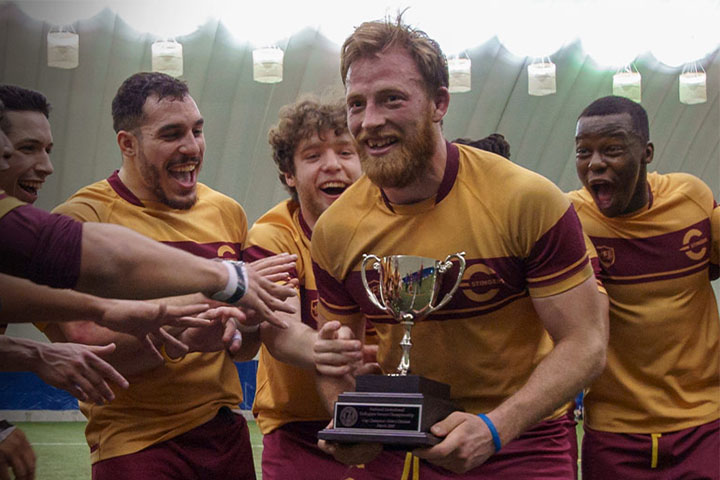 Twelve men’s teams and 16 women’s teams from universities across the country were invited to take part in the national championship. Supported by Own the Podium and the Canadian Rugby Foundation, the tournament served as a talent identification opportunity for Rugby Canada’s national teams.

The following day the Stingers took down the Saskatchewan Huskies 19-12 in the quarter-finals. Then they beat the Waterloo Warriors 31-26 in extra time. Thomas Goetz scored a sudden death try to win the playoff. He was named the Player of the Game.

After two tough games, the Stingers had an easier time in the championship versus the Bishop’s Gaiters. Concordia was up 29-0 at the half and went on to win 34-0.

The Stingers women’s team won two of its three games in pool play. Concordia defeated Saskatchewan 46-0 and Humber College 15-12 before losing 24-5 to Guelph. On Day 2 of the competition, the Stingers lost 22-10 to the Queen’s Gaels in the quarter-finals and were defeated 22-14 by the Laval Rouge et Or in the consolation semifinal.